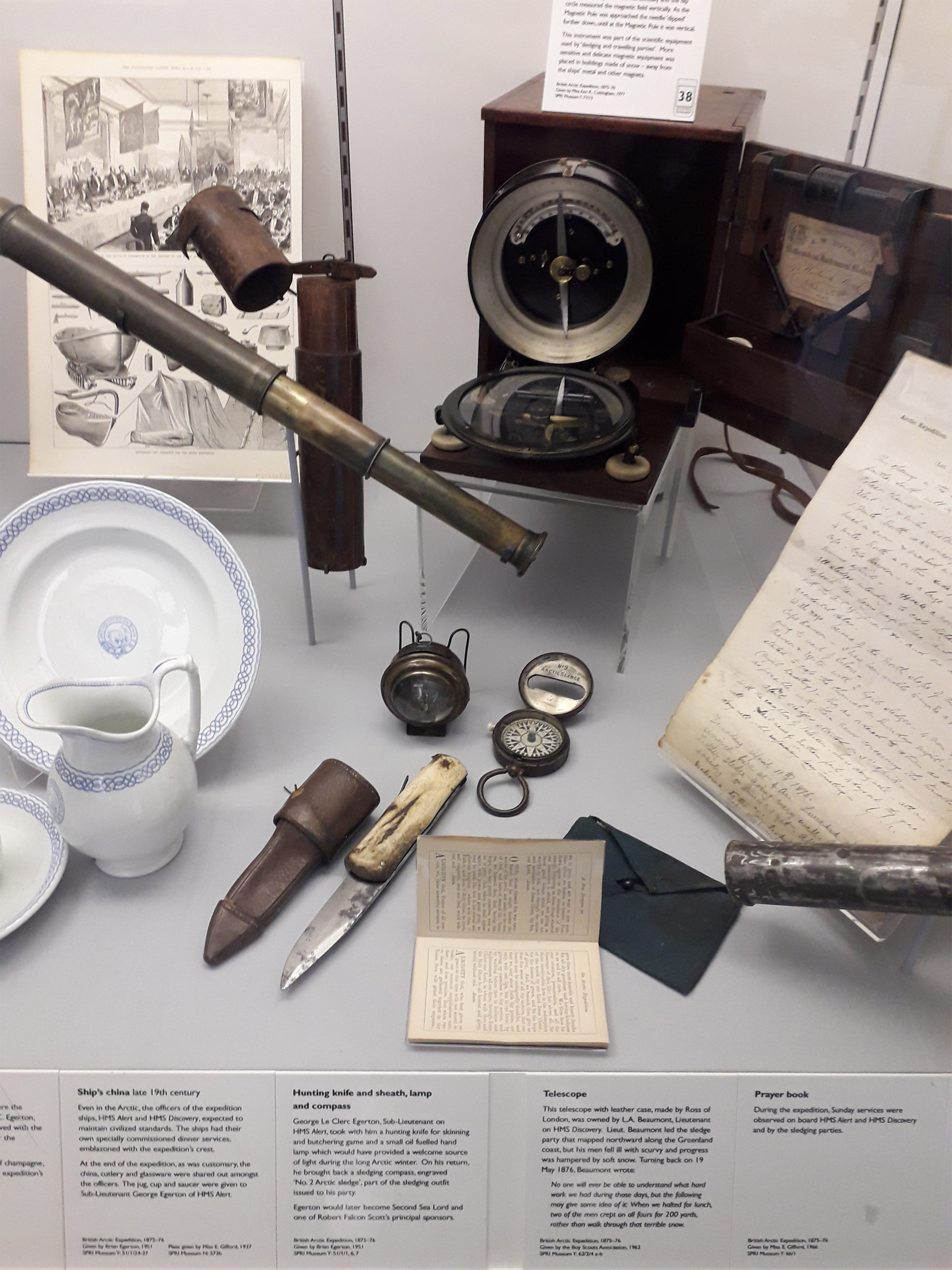 In the second of our Arctic Cultures blog posts, PDRA Nanna Kaalund discusses the meanings and display of Arctic objects.

What makes a seemingly ordinary object a museum object? Following the return of Arctic expeditions, the personal objects used by explorers during their venture took on new meanings. For example, they were used as gifts, or deposited in collections in learned institutions, such as here at the Scott Polar Research Institute. In museums today, objects as diverse as snow goggles, diaries, tins of food, letters, clothes, and cooking utensils from Arctic expeditions are often exhibited together, forming testimony of Arctic experiences. A transference of object-meaning takes place, from the functional and personal, to being part of a collective memory.

Take, for example, a knife. Knives held an important place in Arctic expeditions. Knives were work tools, cutlery, weapons, or objects for trade. Knives could also have a ritualistic or spiritual element, designated as a ‘favourite’ and engraved with the owner’s name or family crest. Today, a knife that belonged to George le Clerc Egerton, the Sub-Lieutenant to the British Arctic Expedition 1875-76, led by George Nares, is exhibited at the Polar Museum in Cambridge, together with other memorabilia from that expedition.

Compare this to the use of knives made by indigenous peoples in the Arctic, which were acquired by British expeditions. In their original home, these knives had similar functions to the ‘British knife’, but once removed from the Arctic, meanings changed considerably, and they did not have the same ‘after-life’ as their British counterparts. In the second half of the nineteenth century and early twentieth century, everyday objects of Arctic peoples formed part of European and Euro-American research into human evolutionary development. The peoples living in the most northern parts of the Arctic were considered to be of particular interest to anthropologists, ethnologists, and geographers due to their geographically remote location. The large amounts of ethnographic data collected by Arctic expeditions functioned (and still function) as evidentiary material for researchers interested in human history.

One such researcher was the anthropologist and geographer Franz Boas (1858-1942). Boas believed that grasping the history of Arctic peoples was a way towards understanding early human migration patterns, as well as the development of specific physical traits and cultural practices. Tools such as knives were central in these discussions, because they facilitated the tracing of the distribution of these technologies. Boas was responding Otis Mason’s (1838-1908) plans for arranging ethnographic collections under the principle of placing together similar objects from different groups with the intention of uniting the understanding of humans under a single theoretical framework, focusing on technology.

As curator at the Smithsonian Institution, Mason played an important part in shaping the presentation of Inuit lives. The knife, Mason argued, was of particular importance to the ethnologist. Mason believed that it was possible to pin-point the development of groups of people based on their technologies. For Mason, knives could be compared to illustrate the developmental stage of different groups of Arctic peoples. By contrast, Boas rejected this type of developmental determinism. Ethnographic collections, Boas argued, should illustrate that ideas of civilization are not absolute but relative. For Boas, a knife could illustrate the specific context where it was produced. In both cases, we can see that the process of organizing museum collections is not a neutral task. The tacit assumptions and beliefs of collectors and curators often shape the structure and content of exhibits.

While Boas and Mason disagreed in terms of how to exhibit Arctic peoples, neither would have suggested that, for example, an Inughuit knife collected by the Nares expedition should be placed in a showcase together with the one belonging to Egerton. This knife might have ended up in a museum, but its significance and function was different to the British memorabilia. This was also the case for objects owned by indigenous peoples employed by expeditions. As is the case with the object-meaning of knives, the institutional memory of indigenous peoples that formed key parts of Arctic expeditions looks very different to that of the European and Euro-American explorers. Therefore, it is instructive to ask ourselves when we visit a museum: what’s in a knife?