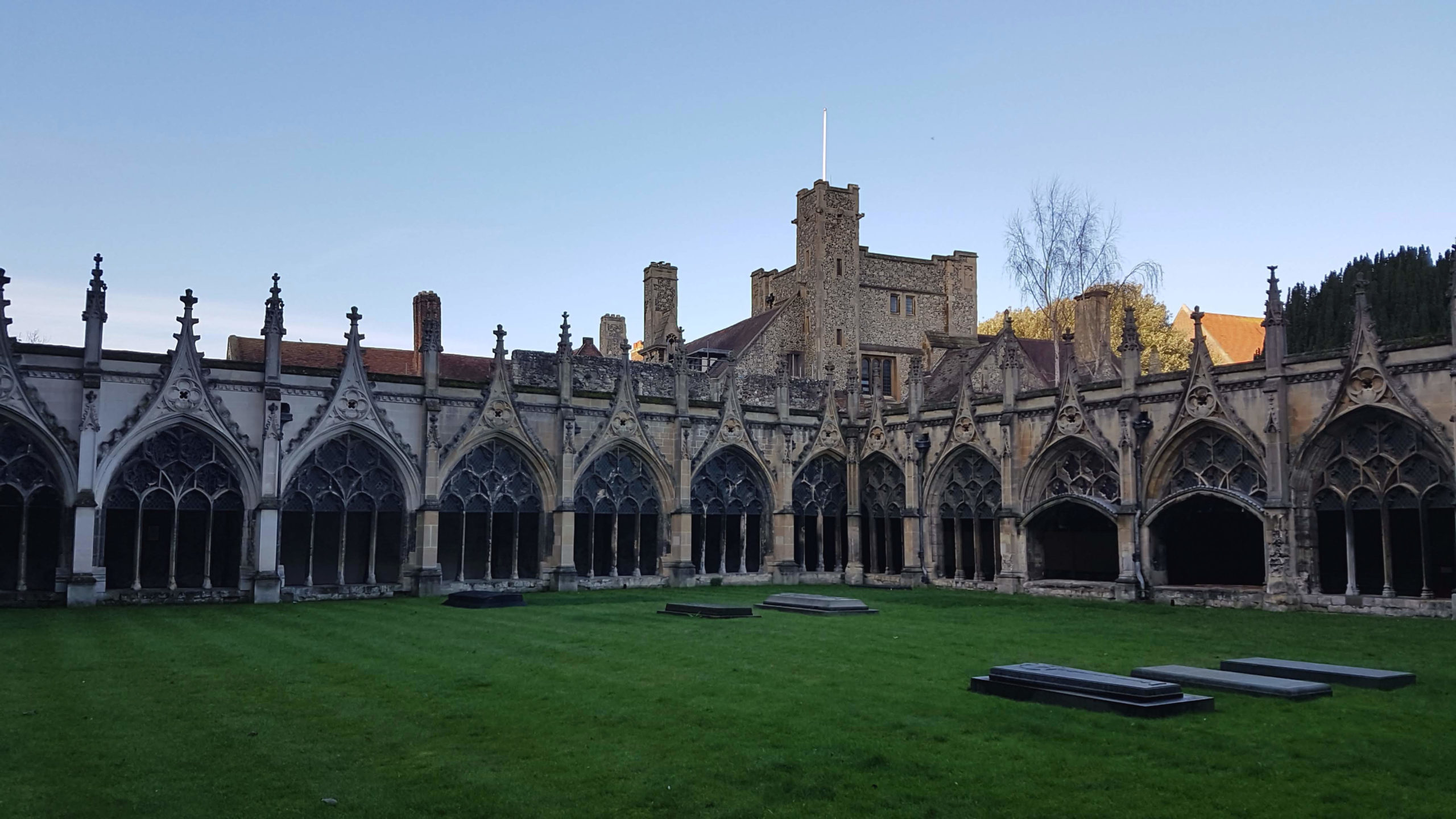 In this post of our Arctic Cultures blog, PDRA Peter Martin discusses his recent research at Canterbury Cathedral and reflects upon searching for histories of Arctic encounter in unexpected places.

One aspect that I was most looking forward to upon joining the Arctic Cultures project was the opportunity to engage with fascinating Arctic collections held in archives around the world. I did not, therefore, expect my research to require me to board the early morning train from London St. Pancras to the medieval English city of Canterbury. This was, nonetheless, where I found myself on a mild morning in December. The reason for this journey was to delve deeper into the story of Kallihirua, a North Greenlander abducted by Captain Erasmus Ommannney during the 1850–51 Arctic expedition in search of John Franklin. Born in the Thule region, Kallihirua was recruited as a pilot to guide the HMS Assistance along the Greenlandic coastline. On the ship’s return journey however, the ice conditions were reportedly too dangerous to permit his return home and so the Inuk was forced to travel to England with the rest of the Assistance crew. Clutching my copy of Thomas Murray’s 1856 book Kalli the Christian Esquimaux, I boarded the train and began the pleasant journey through the Kent countryside on my way to find out more about Kallihirua’s life in Britain. 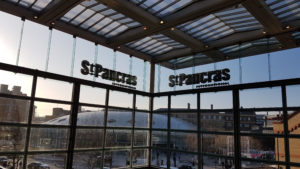 You might ask why I was travelling to this city in particular. A clue to the answer lies in the title of the book I was carrying; upon his arrival in Britain, Kallihirua was entered into ecclesiastical training at Canterbury’s St. Augustine’s College. As part of his transformation into a ‘Christian Esquimaux’, the young Inuk was educated in the college and was taught to read and write in English. He was therefore able to establish a modest but significant correspondence network spanning beyond the college walls. The extant letters and notes from this correspondence are now held in the Archives and Library of Canterbury Cathedral and it was these materials that I needed to examine. 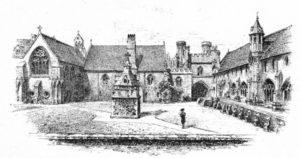 The pleasant weather continued upon my arrival in this historic city and the ancient Westgate towers were particularly striking in the December sun. Weaving through the ancient streets on my way to the Cathedral, I could not help but imagine what the same journey must have been like for the Greenlander all those years ago. Surrounded by landscapes and buildings so different to anything he had experienced before would have inevitably stirred up a mix of emotions for Kallihirua and we can only imagine what his first impressions of the city would have been. 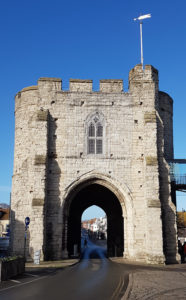 I reached the confines of the Cathedral and was hastily waved through by the porters at the gate who seemed somewhat distracted by the intimidatingly large group of schoolchildren approaching behind me. I crossed the grounds of the Cathedral and entered the gothic cloisters that were hidden behind the main building. Navigating my way through this intimidating architecture, I headed towards a small sign indicating the area of the Cathedral where the Library and Archives were housed. Arriving at the heavy wooden door that led to the library’s antechamber, I turned its rusty handle and felt increasingly uncertain as to what I would find on the other side. 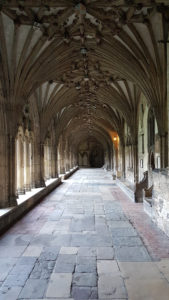 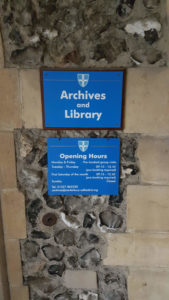 Upon entering the room, I was greeted by the Cathedral archivist who welcomed me warmly to the beautiful wood panelled library. After filling out the necessary paperwork (and adding yet another library card to my collection), I was taken over to a handsome wooden desk in the corner of the room where I sat down ready to get my hands on the archival material. 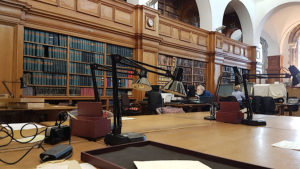 The first item I had pre-ordered via the online catalogue was a folder promisingly labelled ‘Letters from Erasmus Augustine Kallihirua.’ When it was brought over to my desk, it certainly did not disappoint. Inside was a tatty brown envelope containing thirty-two letters that had been written by Kallhirua during his time at St. Augustine’s College. The letters were primarily addressed to the Warden of the college, Dr. Henry Bailey, and to the man who had been instrumental in bringing the Inuk to Britain, Capt. Erasmus Ommanney. Struggling to contain the excitement that all historical researchers feel when confronted with new and exciting archival materials, I hurriedly opened the envelope and began to study the various letters and papers inside. 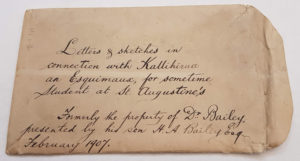 With now only half a day to collect as much information as possible, I sadly did not have time to study the letters in too much detail. There were, however, some materials that I could not help but stop and examine more closely. 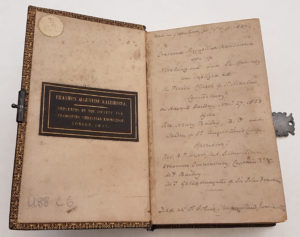 The first was a small copy of The Book of Common Prayer with a namecard fixed to the inside stating it belonged to Kallihirua. Undoing the metal clasp, I noticed that the first page was annotated with details about Kallihirua’s birth – ‘Born in Greenland, Lat 76°N, c.1832’. It also contained information about his baptism ‘in the Parish Church of St. Martins, Canterbury, on Advent Sunday 1853’. Holding in my hand an item that Kallihirua had likely carried on his person at all times was a particularly evocative moment and to see snippets of information detailing his entire life etched within it also felt significant. 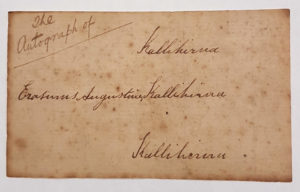 As I flicked through the pages, examining the particular prayers which Kallihirua had bookmarked, a small card fell out and dropped onto the table. The inscription upon it read ‘The Autograph of’ and underneath, written in his own hand, was the Inuk’s ‘full’ name – ‘Erasmus Augustine Kallihirua’. Seeing the name written in this way was certainly thought-provoking. ‘Erasmus’ is the name that Kallihirua had been given by the crew of the Assistance during his time on board, while ‘Augustine’ had been added as part of his baptism. Even ‘Kallihirua’ is an Anglicised version of the Greenlandic/Kalaallit word Qalasirssuaq, which translates literally as ‘large navel’. Seeing this artificial name written by the man himself really brought home the fact that not only had Kallihirua’s home been taken from him, but so too had much of his identity. 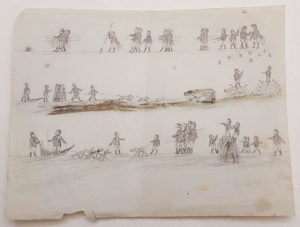 The second item that caused me to pause for closer inspection was a drawing that had been scribbled on a small scrap of paper and had been tucked amongst the letters. Presumably drawn by Kallihirua, the drawing depicted a series of scenes in which Inuit were taking part in various cultural practices. Dog sledging, the catching of auks, and the hunting of a polar bear can all be recognised within this fascinating sketch. As I studied the drawing, I could almost sense Kallihirua’s sense of homesickness as he drew from memory these small figures interacting with an Arctic landscape that was now several hundred miles away. 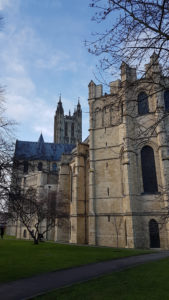 With the train back to London now fast approaching, I was forced to return these mesmerising materials to their archival home and make my way back to the station. As I took a few souvenir photos of the Cathedral grounds on my way out, I began to think about the absurd juxtaposition of where I was versus what I had just been studying. 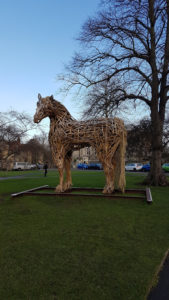 The idea that a series of drawings and letters produced by a nineteenth-century North Greenlander were now housed in this enormous Christian fortress located in the middle of the English countryside seemed beyond belief. I began to wonder how many other fascinating tales of indigenous peoples travelling the world have remained untold due to the fact that their historical trace is currently stored in an unexpected or unlikely location. As I left the Cathedral, I felt renewed sense of belief in our duty as historical researchers to approach archival study in a nuanced and critical way. We must continue to look out for examples of voices that have in one way or another been silenced or overlooked within the archives that we study, and we must also think broadly about the places in which such hidden stories may also be found.