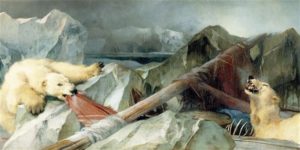 Nanna Kaalund was invited to talk at a symposium called ‘The Frozen Deep: Voices from the Nineteenth-Century Arctic’ on 27 February 2020.

Nanna’s talk was titled: ‘”The Admiralty has been keeping its pictures”: Visual Culture, George Nares, and the “British Arctic Expedition” of 1875-1876′. The symposium was organised by the Centre for Victorian Studies, Royal Holloway, University of London, and held at the Royal Holloway Picture Gallery.