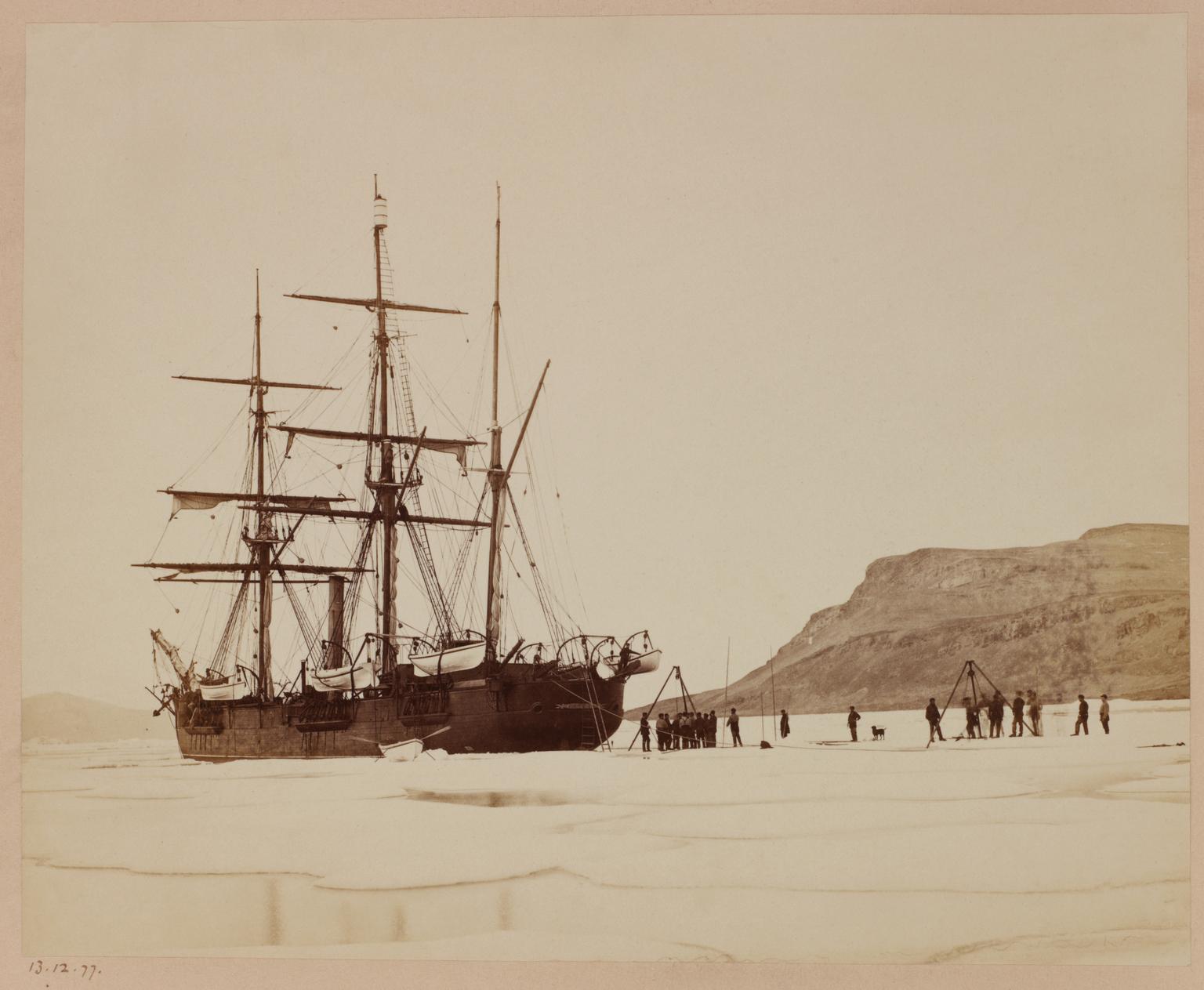 In this episode of our blog, PDRA Nanna Kaalund draws from her research for the Arctic Cultures project to talk about the uses of photographic methods in Arctic science and exploration.

Nineteenth century Arctic voyages, as with expeditions elsewhere, were always expected to produce visual representations of the encountered landscape, natural life, and indigenous peoples. They made paintings and sketches, and when photographic technologies were developed, they also took photographs. But taking photographs in the high Arctic was not straightforward.

One of the issues had to do with the photographic processes of the time. For example, the Second Grinnell Expedition of 1853, which sought to reach the North Pole through Smith Sound, brought along a daguerreotype apparatus. This method did not do well in the cold, and the equipment appears to have been discarded relatively early in the expedition. Although photographic technologies quickly became easier to use, it would be another twenty years before an expedition successfully used photography in the high Arctic. Between 1875 and 1876, the venture known as ‘The British Arctic Expedition of 1875’ produced over 100 photographs of a relatively high quality. Many of these were taken in the area around Smith Sound, as they sought to reach the North Pole. This ambitious geographical goal was the primary aim of the expedition. The stated secondary priority was ‘the advancement of science and natural knowledge’, and visually representing the high Arctic was central to these efforts.

Now, using photography for scientific illustration was not a new concept by the mid-1870s, but it had rarely been done in the high Arctic. The British Arctic Expedition of 1875 brought with them two types of equipment, which used both the older wet-plate and the newly developed dry-plate techniques. There were high expectations as to what they might produce. But this interest in the photographic potential also posed novel difficulties. Because of this, the use of photographs, especially in comparison with other forms of visual material such as drawings, tells us much about the role of Arctic imagery in constructing and upholding specific visions of Arctic exploration.

However, the photographs were not initially made available, whether to the general public or to researchers. Many commentators were unhappy with this, arguing that the Admiralty had been hoarding the images. This was particularly frustrating because the expedition had been furnished by public money. The journal The Photographic News wrote on 7 September 1877 that the photographs should therefore be ‘deemed public property’. Anyone, they argued, should be able to buy copies. But rather than making the photographs available to purchase, the Admiralty decided to publish them as a collection in a small-print run of around 50. The copies were distributed to museums and similar institutions, a year after the expedition returned.

The commander of the expedition, George Strong Nares, published an official account from the expedition in 1878, as Narrative of A Voyage to the Polar Sea in two volumes. This narrative made use of a new technique to reproduce photographs, called the ‘Woodbury process’. This resulted in high quality photographs, and the narrative included six of these in full page format. Whilst the photographs were published in the Admiralty collection, and exhibited in the Photographic Society’s annual exhibition in late 1877, Nares’s narrative would have been the first time that regular readers would have been able to study some of the photographs at their leisure. Here I am referring to the photographs themselves, and not illustrations ‘from a photograph’, which had been published widely in the press.

Now one reason not to reproduce more images is straightforward: keeping the cost down. As it was, the narrative cost £2 2s (around £130 in today’s currency). Another reason, also straightforward, had to do with image quality. The photographers had difficulties balancing exposure times, and many of the photographs were blurry or overexposed. But some of the photographs that were not used were of a very good quality, certainly similar to those included in Nares’s narrative.

It is useful, then, to think about why certain visual materials were selected over others. What did those photographs represent? Leading on from this, how did perceptions change when someone based in Britain encountered the Arctic through photographs rather than illustrations?

Consider the following two pictures. One is from Nares’s narrative, and the other is a photograph taken by the expedition. It is easy to see that some people have been removed – the British expedition crew. 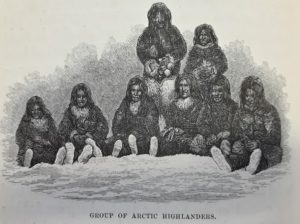 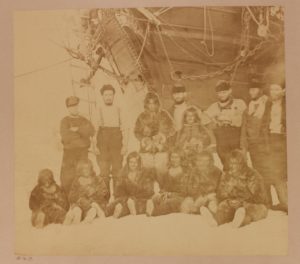 This is particularly significant because of the illustration’s role in the narrative: it formed part of the evidentiary material regarding Inughuit. The text around the photograph is of an ethnographic character, and the illustration visually supported the text. That is, you read about Inughuit, and you saw an example of their appearance – sitting, it seemed, in the snow, in situ. But the photograph tells a different story: one of encounters, and of expedition life.

Furthermore, it is useful to observe that the title of the woodcut did not indicate that it was based on a photograph, even though Nares used this designation several times for other illustrations. That is, it does not draw attention to the existence of another version. Instead, it blends in with the many other woodcuts, as if it was the only version of this scene, an ethnographic study drawn in situ. The photograph, of course, reveals that this was not the case. If a key challenge was to navigate the differences between what the eye saw, when the travelling explorer documented nature and peoples, and what the photograph captured, then this was particularly the case when photographs revealed something, or told a story, that explorers or expedition organizers did not want to showcase. It was also an issue when they wanted the illustrations to function in a specific way.

The photographs from the British Arctic Expedition of 1875 raise several questions around the construction of specific visions of the Arctic and Arctic explorers. This suggests that the functional and epistemic differences between drawings and photographs could have been a major reason as to why the Admiralty restricted access to the unedited photographs. Explorers and expedition organizers clearly considered what the photographs captured, compared to what the drawn sketches and written accounts revealed. What is clear, is that the transference of the photographs into a drawing – the narrative function of which was to represent a detached, scientific, observation of a foreign culture – tells us a lot about the life and meaning of visual materials from the Arctic, and the problematic role of photography in upholding specific visions of Arctic exploration.

Image 1: Photograph showing the H.M.S. Alert cutting a dock in Dobbin Bay. This image is part of the Science Museum Group Collection, and is used under the Creative Commons Attribution-NonCommercial-ShareAlike 4.0 License.

Image 2: Illustration, titled ‘Group of Arctic Highlanders’, published in George Strong Nares, Narrative of a Voyage to the Polar Sea during 1875-6, 1878.

Image 3: Photograph taken by the British Arctic Expedition of 1875. This image is part of the Science Museum Group Collection, and is used under the Creative Commons Attribution-NonCommercial-ShareAlike 4.0 License.