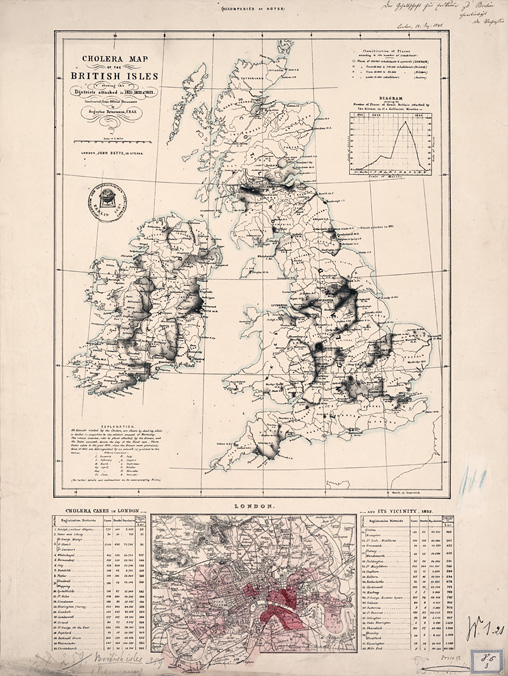 In this post of our Arctic Cultures blog, PDRA John Woitkowitz investigates connections between the mapping of disease and Arctic geography.

Maps of the circumpolar world underwent a remarkable transformation during the nineteenth century. New scientific theories, technological revolutions in printing, and a growing body of data in the form of measurements and travel reports, changed the ways in which the Arctic regions were made visible. This new polar cartography, however, took place within a wider context of mapmaking. Theories and techniques adopted in Arctic mapmaking betray broader trends in the history of geography and scientific cultures. This post looks at a specific moment in which the transfer of such new theories and methods became apparent in the mapping of disease and the cartographies of the Arctic regions.

In the late 1840s, a Cholera outbreak swept across Europe. This crisis not only posed a challenge to public health officials in major metropoles such as Prague, Hamburg or Berlin. The outbreak also attracted the attention of mapmakers trying to locate the causes for the spread of the disease. Cartographical establishments operated as companies within a wider economy of science and politics. The sudden demand for representations of statistical data related to the epidemic promised financial opportunity. In Britain, an earlier outbreak in the 1830s had taken the government by surprise and caused more than 50,000 fatalities across the British Isles. As the population flocked to the cities and industrial life pushed urban sanitation infrastructures beyond the brink, infectious diseases such as Cholera spread widely. As a result, the British government began to collect medical and demographic data.

As the bacterium moved through eastern and central Europe in the 1840s, mapmakers in London were quick to take advantage of this moment. One such cartographer was August Petermann. Before coming to London, the Prussian had moved to Edinburgh to co-edit the English language publication of the Physical Atlas, a supplement to the first volume of Alexander von Humboldt’s Cosmos. Later, Petermann became intensely interested in the Arctic regions. His theories of an open polar sea and a mythical land across the North Pole became a frequent subject of debate at Arctic exploration societies. Petermann had just arrived in London to open his own cartographical establishment when the Cholera outbreak began to sweep through Britain in 1847. Ambitious and quick to spot an opportunity, he sought to apply his cartographic craft to the epidemic.

The Cholera Map of the British Isles is a fascinating document through which to trace the cartographical techniques and geographical theories that later guided Petermann’s Arctic geography. It was one of the first cartographical products he published under his own name. The map combines three basic elements: a map, a diagram, and a table. Two maps show the British Isles and a close-up of central London with various shadings indicating the distribution of fatalities among the population. The use of wax crayon on stone to generate such gradients was not yet a widespread technique in lithographical printing. Likewise, the tonal shading of London’s inner city presented a visualisation of the 1831 statistics unfamiliar to health officials dealing with the renewed outbreak in 1848. A diagram complemented the spatial display with a temporal dimension of the spread of the disease. The tables on the bottom of the document listed London’s boroughs according to the number of fatalities relative to population size.

Petermann’s cholera map is a striking example of his conviction in the power of thematic cartography and distributional geography. For Petermann, statistical data stripped of their spatial dimension were little more than dead numbers. Such figures only came alive when placed in relation to location, extent, and time. In his Cholera Map of the British Isles, Petermann returned the numbers of infections and deaths to their place of origin. The map contextualised otherwise isolated data within their geographical environment. This way of displaying the spread of the disease gave officials a new visual vocabulary and offered new ways of probing the causes of the outbreak. The cholera map, therefore, was to bring about a new way of seeing: to understand the cause and the spread of the disease was, in other words, to understand the data in their geographical dimension. This distributional geography then led Petermann to identify the conditions of dense population centres and harbour towns as hotspots for the outbreak. It took another six years, however, until John Snow, a physician based in London who drew maps to trace infections, identified the city’s water supply and the cramped conditions of urban London as a major source for the spread of the disease in 1854. 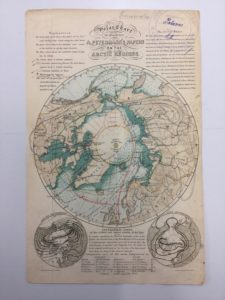 This venture into the world of disease cartography did not amount to more than an episode for Petermann. By the early 1850s, the study of Arctic exploration history along with plant geography, meteorology, and oceanography took up a large part of his time. The change in subject, however, did not imply a change in geographical thinking. The importance of describing natural or human phenomena in relation to their geographical dimension remained a touchstone for the remainder of Petermann’s career. When he stepped in front of the learned classes of London in 1852 to lobby for an expedition to the Spitzbergen Sea between Svalbard and Novaya Zemlya to prove his theories about the existence of open water and land in the central Arctic Ocean, distributional geography was the organising framework in his appeals. Colourful gradients of warm and cold ocean currents, isothermal lines showing the distribution of annual mean temperatures, and the migration of wood filled his maps. Ocean currents, temperature curves, and driftwood had replaced cholera deaths, population size, and infection periods. Yet the theories and techniques Petermann had used in what he ambitiously called a ‘Geography of Disease’ continued to guide his thinking about the geography of the Arctic. Much like the geographical contextualisation of the Cholera outbreak, the changing ways that the Arctic regions were made visible in the nineteenth century were closely connected to the wider transformations in science and cartography.

Image 1: “Cholera Map of the British Isles showing the Districts attacked in 1831, 1832, 1833 by Augustus Petermann, F.R.G.S.” This image of the map includes a handwritten dedication to the Geographical Society of Berlin. Later stamps and notes indicate the accession of the document by the Map Section of the State Library of Berlin (Sig. Kart. GfE V 6,3). Source: “Die bemerkenswerte Karte,” Deutsche Gesellschaft für Kartographie e.V., https://bk.dgfk.net/2012/09/01/308/, last accessed 21 April 2020.

Image 2: “Polar Chart to illustrate A. Petermann’s Papers on the Arctic Regions, 1852”. Map of the Arctic regions showing August Petermann’s proposal for an expedition to locate the open polar sea. Justus Perthes Collection, Gotha, Photograph by John Woitkowitz, 20 May 2019.