In this blog post, PDRA Peter Martin studies the ‘discovery of the Dorset Culture’ and explores some of the techniques used by archaeologists in the early twentieth century to determine the age of objects excavated in the Arctic regions.

How did early twentieth century archaeologists working in the Arctic date the objects they had excavated? Technoscientific techniques such as radiocarbon dating were not widely available until the 1950s meaning that, prior to this, all that archaeologists could rely upon to date an object was close examination of the object itself.

In 1924, the archaeologist and anthropologist Diamond Jenness was analysing a series of tools that had recently been donated to the Victoria Memorial Museum (now called the Canadian Museum of History) in Ottawa, Canada. The objects had been excavated from Cape Dorset on Dorset Island (in modern day Nunavut) by Major Lachlan Burwash – an exploratory engineer of the Canadian Department of the Interior – and had been sent to the museum as a donation to its extensive material culture collections.

As he began sifting through the thousands of materials and fragments, Jenness noticed that there were significant differences in how some of the tool-shaped objects had been produced. As we can see from the image below, holes had been made in many of the objects. However, on close inspection, it became clear that these holes had been made using varying techniques. 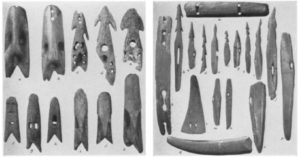 Jenness determined that the holes in the lighter-coloured objects (top row of left image) had been made through the use of a bow drill. The holes in the darker objects (bottom row of left image), however, had been made by rubbing and scraping another tool against the stone until it was worn through. We can see that differing drill techniques have also been used on the tools in the image on the right. The contrast is made even clearer in the engravings which accompanied Jenness’s published article, which are reproduced below. The object on the left has a larger, elongated hole while the objects on the right have smaller, rounded holes. 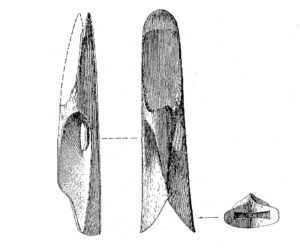 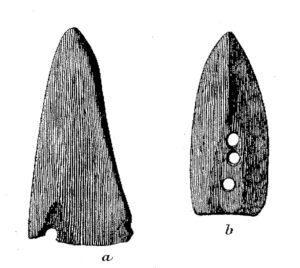 Based on this analysis, Jenness came to the conclusion that the darker tools had not been made by the same techniques and practices that had produced the lighter ones. Instead, he argued that they had been produced by a much older and hitherto unknown civilisation that had existed in the Arctic before the modern-day inhabitants (now known as ‘Thule Culture’ by archaeologists). Jenness named this older civilisation the ‘Dorset Culture’ in recognition of the location in which the original excavation had taken place. This research by Jenness and his consequent desgination of the ‘Dorset Culture’ now form an important part of archaeological understandings of the wider Arctic.

Further research has since revealed that these ‘Dorset peoples’ existed in the Arctic from around 500 BC to 1500 AD and evidence indicates that they occupied the entire Western Arctic region, stretching from the Bering Straits to Northern Greenland. They have since been understood to have produced a range of different tools and objects, and their artistic talents in particular have been appreciated for their detail and complexity. What is less clear, however, is the reason behind the sudden disappearance of these people. Rapid climate change, disease, and contact with the ‘Thule peoples’ have all been suggested as possible reasons, but the archaeological evidence on which to reach a conclusive answer to this question remains limited.

The study of the material culture of this part of the Arctic has interested previous scholars based in Cambridge, as has been discussed by our colleague, Johnathan King, based at the Museum of Archaeology and Anthropology. The Arctic Cultures team have been able to consult several materials relating to both the ‘Dorset Culture’ and the ‘Thule Culture’, still held in Cambridge at the MAA and the Polar Museum at the Scott Polar Research Institute. This has enabled the team to reflect on the techniques used by Jenness, while analysing some of the object collections. 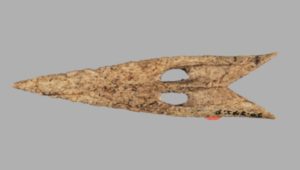 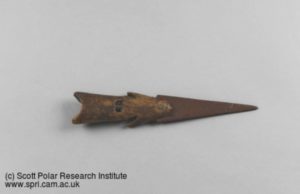 The harpoon head on the left, for example, was collected by Graham W. Rowley in the Foxe Basin region in 1939 and is now held in the MAA. Just as Jenness explained, we can see the holes have been made through a process of rubbing and gouging. This means that this particular object would be classified as representative of the ‘Dorset Culture’.

The harpoon head on the right, however, was produced much more recently – most likely in the early twentieth century. It was collected by Phyllis Wager and Lawrence Rickard during the 1935–36 British East Greenland Expedition and is now held in the Polar Museum. It was made by carving the antlers of a Caribou and we can clearly see that neat holes have been drilled through use of a bow drill. We can therefore conclude that this object would have been classified as representative of the ‘Thule culture’.

Objects such as these give us crucial insights into how knowledge about the Arctic has been translated, distributed and transformed historically. All sorts of materials were excavated and collected from across the Arctic from, at least, the sixteenth century and were transported to places such as Cambridge, among many others, in order to be analysed by collectors, museum curators and scholars. Numerous theories emerged over the centuries as to the (pre)historical origins and migrations of the Inuit, and museum objects such as these were constructed as vital pieces of evidence within these contentious debates. Examining these is one of the aims of our Arctic Cultures project.