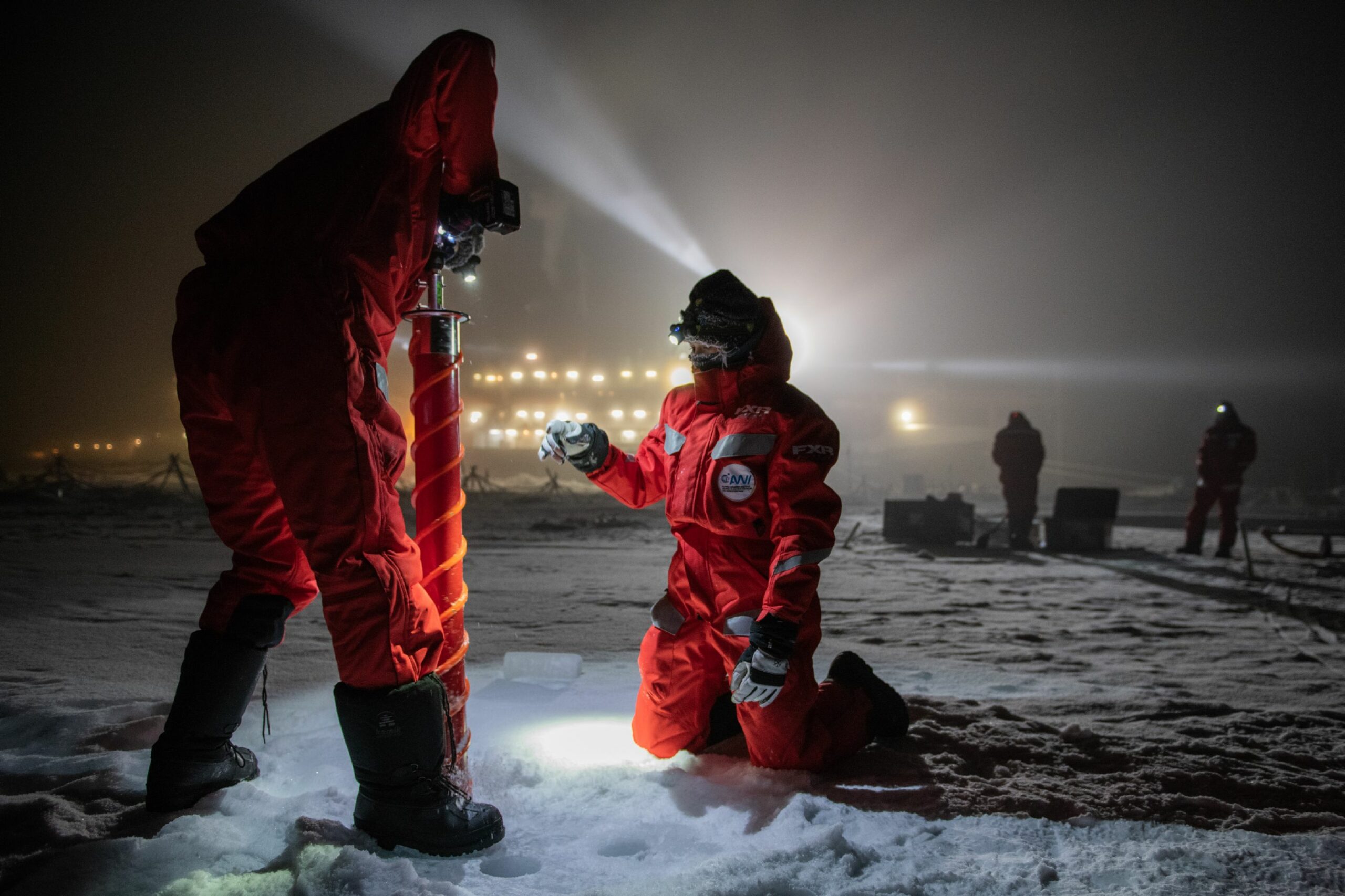 In this blog post, PDRA John Woitkowitz reflects on the uses of history in the 2019-20 MOSAiC expedition to the central Arctic Ocean.

Few things should be as unambiguous as the past. Studies in the ways societies have envisioned time, however, have raised important questions about understandings of history. Philosophies of time, as the historian François Hartog suggests, are the building blocks that shape the categories we rely on to make sense of the worlds that were, that are, and that will be. Such vocabularies have not only given us languages to imagine past events. Thinking through conceptual categories of time has also sparked fundamental questions about the durability and the boundaries of history. Seemingly discrete concepts such as ‘the past’, ‘the present’, and even ‘the future’ appear less self-evident when seen as products of historical debate, not eternal givens. As much as the future may already have begun, the past may very well extend into the present.

Such convergences of time are no stranger to the Arctic. Truth and reconciliation commissions in the Arctic, for example, are painful but important reminders of how histories of colonialism continue to unfold their violent legacies in the twenty-first century. Likewise, the Arctic is among the regions most accutely associated with the impacts of anthropogenic climate change. As different times meet in the circumpolar world, planetary futures and scientific interests converge once more on the central Arctic Ocean.

Perhaps no other scientific endeavour in the central Arctic region has attracted as much attention in recent years as the MOSAiC expedition of 2019-2020. MOSAiC is short for  Multidisciplinary drifting Observatory for the Study of Arctic Climate and was spearheaded by the Alfred Wegener Institute, Helmholtz Centre for Polar and Marine Research in Bremerhaven, Germany. Assisted by vessels from Sweden, Russia, and China, international scientists aboard the research icebreaker Polarstern collected data to understand the impact and the processes of a warming planet in the central Arctic region. Fastened to an ice floe, Polarstern used the ice drift to travel across the Arctic from north of the Laptev Sea to Fram Strait between Greenland and Svalbard for a full year. Scientists from numerous countries and institutions conducted an ambitious research programme ranging from the atmosphere to the deep sea in what was billed “the largest Arctic expedition of all time”. 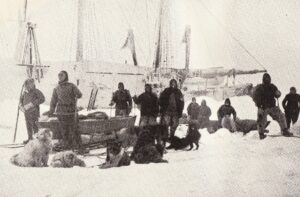 History came to play an important role in the expedition. While scientists will pore over the estimated 135 terrabyte of data amassed throughout the drift to model potential trajectories of climate change in the coming years, the story of MOSAiC as it is presented is carefully situated within the history of nineteenth-century polar exploration. Specifically, the Fram expedition of 1893-1896 led by the Norwegian explorer Fridtjof Nansen is used as the principal touchstone to frame the yearlong drift. With his expedition, Nansen had proved the existence of a natural ice drift in the Arctic Ocean and its effective use as a way of polar travel. The person and the writings of Nansen, however, also evoke modernist fascinations with nineteenth-century polar exploration: a yearning for the scientist’s push into the unknown beyond the ice, a nostalgia for an allegedly unadulterated quest for knowledge, and the time-honoured struggle between nature and science. The MOSAiC expedition leader, Markus Rex, explained that he kept the two-volume set of Nansen’s 1897 account in his quarters during Polarstern’s yearlong drift.

As irresistable as the siren call of the ‘Heroic Age of Polar Exploration’ may be, its use for understanding the historic complexities of scientific travel in the Arctic is limited. More than half a century of Indigenous political engagement and a growing body of scholarship in the field of Indigenous studies have shifted perspectives, indeed have rewritten histories of science in the Arctic. Here, Nansen serves to widen the historical aperture to highlight his and MOSAiC’s debts to Inuit knowledge of mobility and technologies of travel, for example in the use of sled design and survival gear. Oral histories and collaborative research have demonstrated that Inuit have been making long-distance journeys for centuries. Yet the use of frontier language in the MOSAiC expedition’s cinematic trailer, as well as naming the science camp “The Fortress” along with a “courtyard” and “outer walls”, is a reminder of the work that still remains to be done to draw greater attention to histories of science and their legacies in the Arctic.

Yet if Nansen serves as a historical marker ushering in a new age of polar travel, he also signals the dawn of another period in polar science. The search for an Open Polar Sea captivated the scientific societies in Europe and North America throughout the nineteenth century. Theories of a large body of water that was free of ice drew on new forms of mapping the physical geography of the circumpolar world, one in which natural phenomena were interpreted as relational elements in a regional if not planetary system. The Prussian cartographer August Petermann was one particularly effusive proponent of the Open Polar Sea hypothesis and inspired numerous expeditions to the central Arctic. The Jeannette expedition to the Chukchi Sea organized by the American publisher James Gordon Bennett in 1879 was one of them. It was debris and a pair of pants from the shipwrecked expedition that washed ashore in Greenland—thousands of kilometres away—that appeared to confirm Nansen’s theory of the transpolar drift. Ironically, Nansen’s 1893 drift expedition, locked in ice without any trace of open water, also marked the end for a theory that had animated science in the field and theoretical debate, not least for the first German expeditions to the Arctic regions. 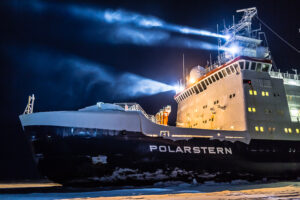 If Nansen is perhaps a curious choice to underwrite German ambitions for science leadership in the Arctic, his biographical arc signals the historical antecedents of Arctic geopolitics. Nansen’s later life which saw him in the role of diplomat and High Commissioner for Refugees at the League of Nations, a role for which he was awarded the Nobel Peace Prize in 1922, combines the worlds of science and diplomacy with the qualities of responsible global citizenship. Science diplomacy, indeed, is among Berlin’s most potent instruments to position itself as a circumpolar science hub all the while asserting a presence at international fora shaping Arctic affairs. Nansen’s embodiment of these dimensions was not lost on the expedition leaders. Neither was MOSAiC’s wider geopolitical importance:  “If we look back to the large historical polar expeditions,” Markus Rex explained at a pre-expedition talk in Bremerhaven, “we mostly recall names from Great Britain and Scandinavia. Most were led by Great Britain, Scandinavia, sometimes the United States; and Germany participated as well although these were operations on a much smaller scale. With MOSAiC, we move up from the second tier to the first tier and take leadership in the largest Arctic expedition of our time.” If the country’s history of commerce, science, and war in the region still awaits comprehensive study, the multinational League of Scientists aboard Polarstern signalled Berlin’s claim to a frontseat in Arctic affairs.

History rarely lends itself to easy adaptation. There are no easy stories, no pure heroes. Those engaged in the study of the past select, interrogate, assemble, weigh, and communicate in a continuous process of retelling and rewriting. History’s voices are multiple; some silently retained in the material artefacts of time, others flowing in story and song binding generations in custom, memory, and knowledge. At its worst, history revives the Great Explorer Mythology disguised in the language of polar romance and imperial nostalgia. At its best, however, history can inform and foster understanding. It can make clearer how past experiences become ingrained in ways of seeing and understanding. It can help rethink what seems self-evident as a product of a certain point in time which then creates space to allow for change. History can be generative in that it allows us to imagine futures that, in the knowledge of the legacies of centuries of colonialism and unsettling scientific practices, build on those enduring currents that point towards an inclusive and equitable understanding of the Arctic regions. Those who engage the past are therefore best positioned to flank the urgency of climate change by efforts to build a deeper understanding of the histories and legacies of polar science.