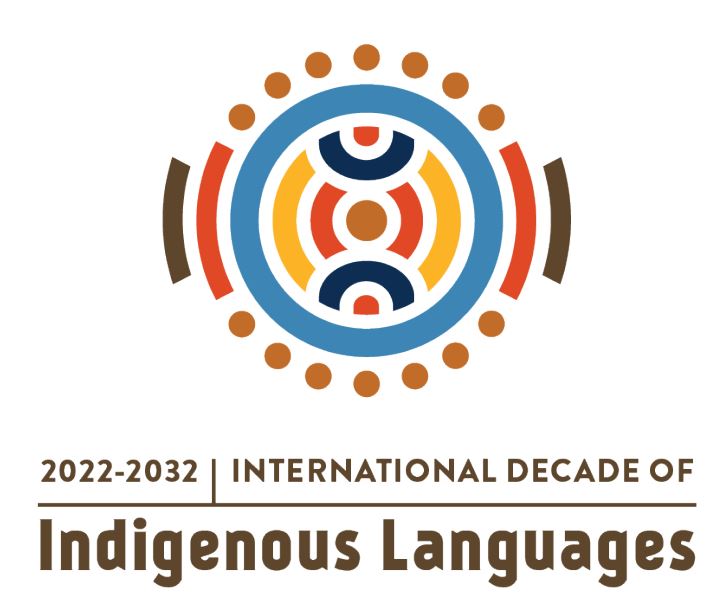 In this blog post, PDRA Peter Martin explores the history of international interest in the Kalaallisut language.

In March 2021, UNESCO announced the establishment of a Global Task Force to coordinate the forthcoming ‘International Decade of Indigenous Languages 2022-2032’ (IDIL). Continuing the agenda of 2019’s ‘International Year of Indigenous Languages’ (IYIL2019), the Task Force has been established in order to ‘prepare, plan, implement and monitor activities’ which seek to ‘preserve, revitalize and promote’ the various languages spoken by indigenous peoples around the world. Explaining the initiative’s primary aims, the UN’s Deputy High Commissioner of Human Rights, Nada Al-Nashif, stated: “In proclaiming this Decade, the international community is recognizing that indigenous peoples represent a distinct group whose human right to language should be promoted and protected. This proclamation is also a call for action – the preservation of indigenous languages not only requires greater awareness but also concrete commitments.”

This important international initiative is of particular relevance to the Arctic Cultures project. The circumpolar Arctic is home to speakers of many different indigenous languages, including Inuktitut, Sámi, Yakut and Evenki among others, and many of these languages are represented by the different organisations that are involved in the IDIL’s Task Force.

One Arctic language that was targeted during IYIL2019, and which will almost certainly be a focus of the IDIL, is Kalaallisut. Spoken by approximately 88% of the population of Greenland, Kalaallisut is recognized as an official language of the island. While such status may mean that Kalaallisut has a somewhat more secure future in comparison to other indigenous languages, it is still widely considered to be a language that is in need of further support. Kalaallisut is the most widely spoken of the three dialects common in Greenland, together with Tunumiit oraasiat in East Greenland and Inuktun in North Greenland.

It is important to note, however, that the IYIL2019 was certainly not the first time that Kalaallisut has attracted interest from the international community. Non-indigenous interest in this ancient language can be dated back to at least the mid-seventeenth century. The earliest European travellers in the region were fascinated by vernacular spoken amongst the Greenlandic population and a series of attempts were made to document and interpret it in order to establish a reliable means of communication. Of course, we must not forget that religious conversion and colonial ambitions also played a significant role in this desire for meaningful oral, and later literary, exchange.

By the mid-nineteenth century, the matter had drawn the attention of scholars from across Europe and North America. An example of such cosmopolitan translation efforts can be found in the Greenland-Eskimo vocabulary, for the use of the Arctic expeditions (1853). This intriguing book was commissioned by the Lords of the British Admiralty and was collated by the scholar John Washington and published by the influential John Murray publishing house. The book sought to provide British naval officers travelling in the Arctic regions with a guide on how to communicate with the local peoples they encountered. 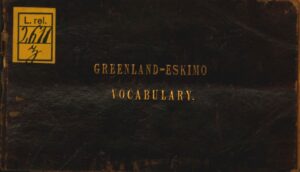 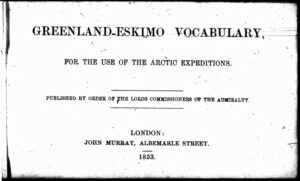 The book included a series of word tables, shown in the images below, and gave English translations of the words that comprised this ‘Arctic’ language. It is interesting to note that the languages are translated in both directions – first English to Kalaallisut and then Kalaallisut to English.

It is also important to add here that this book was in fact a revised version of an earlier work by Washington, Eskimaux and English Vocabulary for the use of the Arctic Expeditions (1850) which he had prepared for the 1850–51 British naval expedition in search of the missing ships Erebus and Terror. The preface to his 1853 revised edition gives some indication as to the changes that had been made. As the note explains, ‘While preparing the work for the press an opportunity of revising the whole, direct from the lips of a native Eskimo, unexpectedly occurred.’

The ‘native Eskimo’ to which Washington delightedly refers was in fact Kallihirua, a member of the Inughuit community, and known to previous readers of the Arctic Cultures blog. As the preface continues, ‘In 1852, Kalli-hirua passed some days with me, and we went partly over the Vocabulary […] so that every word has now been revised from the lips of a native.’ It seems that along with his ecclesiastical training at St. Augustine’s College, Kallihirua had also assisted Washington in the writing of the Greenland-Eskimo Vocabulary. This note hence reveals a fascinating moment of linguistic exchange and demonstrates once again that European knowledge about both the Arctic and its inhabitants was in many cases generated through collaboration between indigenous and non-indigenous peoples.

Language has been an important aspect of my Arctic Cultures case study examining the international scholarly debates concerning the supposed ‘origins of the Inuit.’ Vocabularies and dialects were used by a range of ethnographers and linguists to draw distinctions between the different communities living in the Arctic. These imposed linguistic boundaries formed the basis of lasting theories on migration and interaction amongst northern inhabitants and went on to inform more problematic discussions on the ‘development’ and ‘progression’ of different Arctic cultures.

The Danish colonial administrator Heinrich Rink, for example, saw language as a crucial factor in understanding the historical origin and migration of Inuit across the Arctic regions. He published an 1890 article in The Journal of the Anthropological Institute of Great Britain and Ireland that offered ‘a safe conclusion concerning the origin of the Eskimo’ that could be ‘drawn from the designation of certain objects in their language.’ By studying the book above and combining these insights with his own experiences in the Arctic, Rink concluded that ‘Alaska [must] have been the culture-home’ of the Inuit. Rink’s understanding of Kalaallisut was celebrated by his contemporaries, but it is important to remember that these skills were honed during his time serving as a colonial administrator for the Danish state in Greenland.

It is therefore vital to investigate the role that language has played in historical processes of encounter, scholarship, colonisation and governance within the Arctic regions. Doing so allows us to recognise the enduring legacies of these various processes and also gives important historical context for contemporary international interest in Arctic languages today.