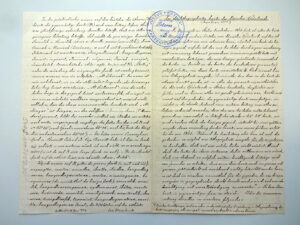 John contributed a blog entry on the history of global networks in the making of Arctic cartography for the Gotha Research Library in Germany.

As part of his case study research for the Arctic Cultures project, John conducted archival research in the map and correspondence record collections of the former Justus Perthes Publishing House in Gotha during August 2020.

The article “Samuel Kleinschmidt und die Arktis-Kartografie zwischen Nuuk und Gotha” (“Samuel Kleinschmidt and Arctic cartography between Nuuk and Gotha”) examines the role of missionaries and Inuit in the production of geographical knowledge during the mid-nineteenth century. Drawing on maps and letters held by the Gotha Research Library, John illustrates the reciprocal dynamics of knowledge circulation among the Gotha mapmakers in Europe and Inuit and missionaries in Greenland.

John’s archival visit to the Justus Perthes Collection was also supported by a Herzog-Ernst-Fellowship by the Gotha Research Centre.