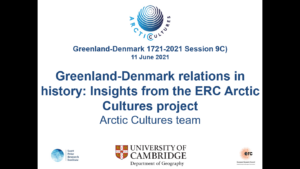 The full project team are presenting a panel at the “Greenland-Denmark 1721-2021” conference in Copenhagen later today, 11 June 2021.

The panel will draw on research by the Arctic Cultures project that bears specifically upon the relations between Greenland and Denmark in historical perspective. The session is titled: “Greenland-Denmark relations in history: Insights from the ERC Arctic Cultures project”, and involves all of the team. Peter’s paper discusses new work on the Danish geographer Hans Peder Steensby and his theories on the history and migration of the Inughuit. John will report on his work on Samuel Petrus Kleinschmidt, transimperial science and the second German Arctic expedition in 1869-70. Nanna will discuss the making of an international community of Greenlandic research in the late nineteenth century, with a starting point in the publication of Hinrich Rink’s book “Danish Greenland”.  Johanne will talk about connections between early twentieth-century expeditions to Svalbard and Greenland. Richard will introduce and chair the panel. We are delighted that Jens Heinrich, of the Greenland Representation in Copenhagen, will join us as the discussant for the session.