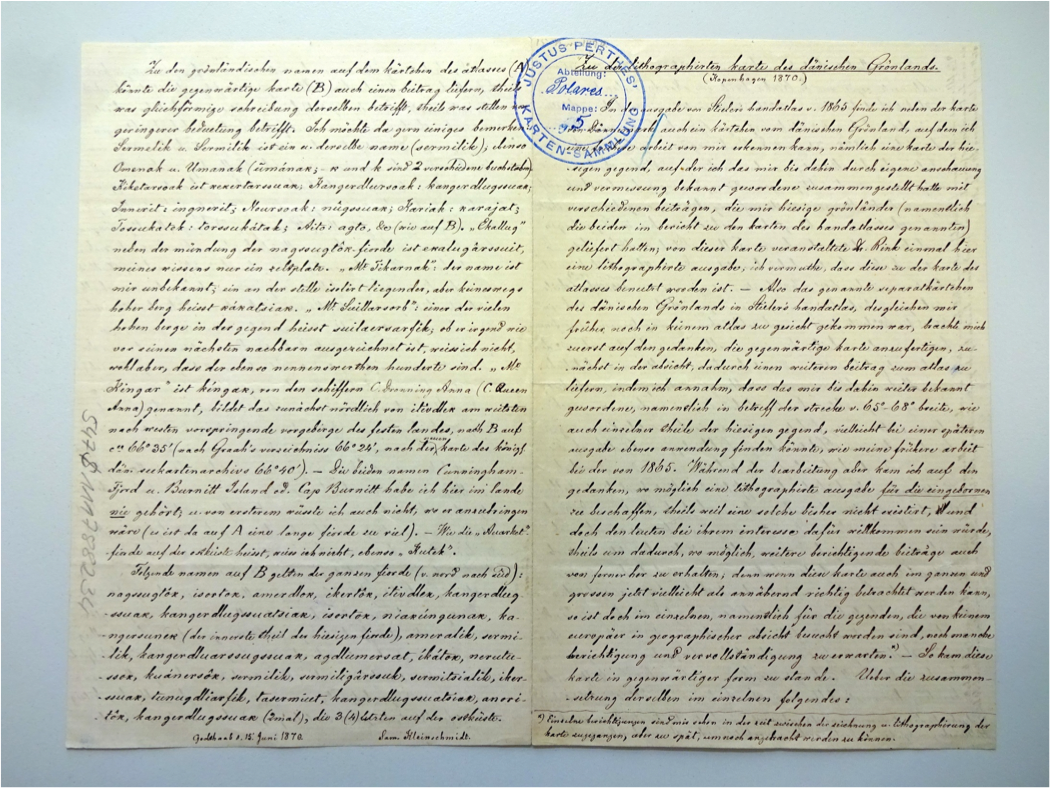 In this blog post, PDRA John Woitkowitz reflects on the implications of nineteenth-century Greenlandic and German mapmaking for a global history of Arctic cartography.

On 15 June 1870, the Moravian missionary Samuel Kleinschmidt wrote a letter from Nuuk in Greenland to the Justus Perthes Geographical Establishment in Gotha in Germany. A map of the island entitled “Danish Greenland” in the 1865 edition of the Stieler Hand-Atlas had spurred Kleinschmidt’s interest. The missionary, in fact, believed that he was able to identify “a recent work by myself” in the Stieler. “If this map, by and large, can perhaps be considered as nearly correct,” he wrote, “there are quite many corrections and additions to be expected, specifically for those regions no European has visited with a geographical interest in mind.” Kleinschmidt noted that he now had constructed a revised version of the map based on observations and oral knowledge by the Kalaallit and his views on the geography of southwest Greenland. This ‘corrected version’ of the Stieler Hand-Atlas map of Greenland reached the Justus Perthes Geographical Establishment in Gotha in November 1870. 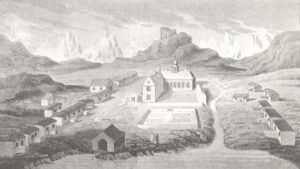 The story of Samuel Kleinschmidt is useful to re-think those histories that have described the emergence of the modern world as a diffusion of European Enlightenment philosophies to the non-European world. Born in 1841 as the son of German-Danish parents in Alluitsoq (Lichtenau), a mission station of the Moravian Church in Greenland, Kleinschmidt was raised trilingual—German, Danish, and Kalaallisut. Having attended the missionary school in Saxony and having worked as a teacher in Denmark and the Netherlands, Kleinschmidt returned to Greenland in 1840. At the mission, Kleinschmidt navigated the varying interests of the Danish colonial authorities, the instructions of the Moravian Church, and his life among Greenlandic society. Specifically, his criticism of the mission’s strict use of canonical punishment soon isolated him among his fellow missionaries. Beyond his teachings and sermons in the seminary of the mission, Kleinschmidt dedicated significant time to learn about Kalaallit knowledges of Greenlandic geography and language. In 1851, he published his perhaps most renowned work on the grammar of the Greenlandic language, which earned him an offer of an honorary doctorate by the University of Berlin. As a lay theologian and a lay scientist, Kleinschmidt complicated the seemingly sharp distinctions between an Arctic ‘periphery’ and a European ‘centre’, traversing these boundaries and connecting Greenlandic knowledge and culture with the emerging world of nineteenth-century science in Europe.

Kleinschmidt’s letter of 1870 to the mapmakers in Gotha is all but a ‘peer-review’ of one of the Perthes Establishment’s premier geographical products. With few instruments, Kleinschmidt had travelled the fjords of southwest Greenland and collected measurements and observations of the coastlines of the region. When he encountered the Stieler’s map section, he critically assessed the product and drew up an extensive list of corrections. Specifically, Kleinschmidt collated a list of toponyms, precise locations for glaciers along with a commentary on apparently non-existent geographical features. He also corrected Greenlandic spellings and offered information on the significance of places: “’Ekalluq’ next to the mouth of the Nagssuglor Fjords is Eralugarssuit, according to my understanding only a campground. ‘Mt. Tikarnak’: the name is entirely unknown to me.” In reference to European toponyms of coastal formations, Kleinschmidt explained: “I have never heard of the names Cunningham Fjord and Burnitt Island or Cap Burnitt. I also would not know where to place the first one.” In particular, it is these corrections of names and the specification of the coastal geography of southwest Greenland that illustrate Kleinschmidt’s substantial contribution to the Stieler’s cartography of Greenland. 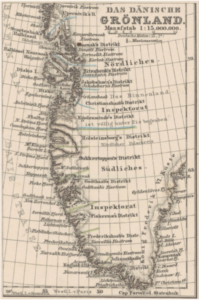 Travels and observations along Greenland’s coast were important sources of Kleinschmidt’s commentary, but they were not the only ones. In the 1850s, two printing presses were acquired and installed at the Danish colonial administration under Heinrich Rink in Nuuk and with the Moravian mission under Kleinschmidt at Noorliit (Neu-Herrnhut). These presses not only published numerous theological pamphlets and natural histories. They were also used as simple lithographical presses to print maps. As a result, some of Rink’s cartographies of the southwestern regions served as an important source for Kleinschmidt as did travel reports and maps from the Royal Danish Maritime Archive in Copenhagen that the missionaries collected in their growing seminary library at Noorliit. A collection of European travel literature and geographical journals, official charts, natural histories, and maps printed in Greenland made for a rich set of data and information. Kleinschmidt’s descriptions of these facilities and sources for the production of his own cartography of Greenland are remarkable for the insights they offer about the integration of Greenland within the transatlantic network of scientific knowledge making.

Recurrent remarks and mentions of Inuit knowledge in the collating of geographical information and its presentation are a hallmark of Kleinschmidt’s writing. In the cartographies of European travellers and mapmakers, the roles of Indigenous co-travellers and co-producers of geographical knowledge are often unacknowledged and made invisible. Throughout his letter, however, Kleinschmidt re-inscribes Kalaallit actors and knowledge back into the history of Arctic mapmaking. He continuously reminds the reader that his commentary and his map is based on observations and conversations with Inuit. He, for example, notes the importance of “extensive oral explanations” along with “numerous map sections designed by Indigenous people” for his own understanding of Greenland’s geography. Specifically, he highlights two “special maps” made by two Kalaallit members of the mission, Aron and Abraham, and their reports in the construction of Kleinschmidt’s Stieler map. In very few pages, Kleinschmidt makes plain the instrumental role of Inuit as knowledge holders and mapmakers in the history of Arctic cartography. In this context, his letter is an important document in the broader re-evaluation of the role of Indigenous people in the history of nineteenth-century mapmaking. 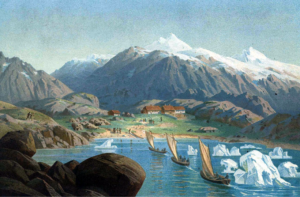 While important aspects in the history of the cartography of the Arctic regions in and of themselves, the role of Kalaallit knowledge and the close integration of geographical knowledge made in Greenland with the wider North Atlantic world also re-casts histories of European exploration. The mapmakers at the Justus Perthes Geographical Establishment also acted as expedition organizers. When preparations for the first German Arctic expedition to East Greenland began in the 1860s, cartographers in Gotha referred to Kleinschmidt’s work. In 1865, sketches of Greenlandic maps revealed not only the use of his maps but also that the German organizers considered Kleinschmidt’s work superior to that of the Danish naval charts. Although plans for the German voyages saw the vessels travel to the northeastern regions of Greenland, hoping to locate a passage to the fabled Open Polar Sea, shipwreck in the ice resulted in one crew seeking rescue on a floe. In a twist of fate, the drift south along the East Greenlandic coast for the German sailors and scientists would end in the very place that Kleinschmidt had described with great detail in his maps: the Moravian mission station of Narsarmiut (Friedrichsthal) at the southern tip of Greenland.

Kleinschmidt’s letter in 1870 is only a brief moment in a long and complex history of Arctic cartography. Yet as a document in this story, it is a rich and important source when re-assessing the processes and dynamics of knowledge transfer in the making of European spatial understandings of the Arctic. It makes plain that Greenland was inextricably interwoven into the structures of exchange and circulation of knowledge in the North Atlantic world. European cartographies of the Arctic not only were powerful instruments in the construction of the Arctic. They were also objects of critical examination and revision. In this context, a new history of European exploration and mapmaking of the Arctic regions needs to be understood as a global history of knowledge, one that foregrounds the reciprocal nature of science and cartography and one that examines the specific nature and the legacies of these relationships.

Image 4: “Arrival of the Hansa men at Friedrichsthal” in Karl Koldewey, German Arctic Expedition of 1869-70, and Narrative of the Wreck of the Hansa in the Ice, 1874.

An earlier version of this blog entry was published in German at the Blog der Forschungsbibliothek Gotha on 4 May 2021.