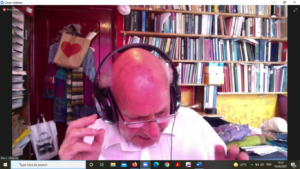 This very prestigious award is some small marker of the esteem with which Piers is held by those of us involved in Arctic social sciences and humanities. During ICASS X, the presentation to Piers was made virtually, and the Arctic Cultures team joined an international audience to celebrate Piers’s achievements. Some images from the presentation are below. Keen-eyed observers of the Arctic Cultures project may spot what is now the project office… 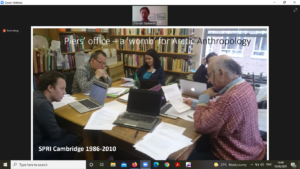 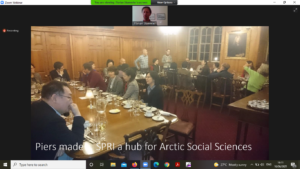 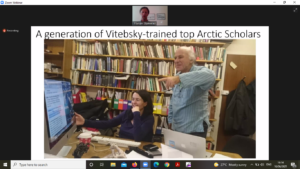 Many congratulations from Richard and all the team to Piers!

The full citation from IASSA is as follows:

Dr. Vitebsky served as the head of anthropology and Russian studies at the Scott Polar Research Institute (SPRI) in Cambridge, UK in 1986–2016. Following his 30 years of service, he remains active in continuing his own diverse research programme. This nomination specifically recognizes his influential publications, innovative research projects and programmes, assistance to colleagues, and particularly early career scientists in advancing their own research, empower- ing indigenous researchers, moving Arctic social science themes to the forefront of general polar research, and making Arctic social science known across wider society.

When Piers joined SPRI in 1986, IASSA did not exist and international Arctic field-based social sciences could hardly be called circumpolar, as a full half of the Arctic areas was accessible only to Soviet scholars. Piers was among the first to dare the adventures offered by the opening of the Russian Arctic to foreign scholars. In 1988 when he began working in the then-Soviet Union, fieldwork for a westerner was anything but straightforward: it involved the opening of intellectual and diplomatic channels. Piers both foresaw and contributed to the upsurge of international interest in the Russian Arctic in the late 1980s and 1990s, and facilitated the path for Western colleagues interested in pursuing fieldwork in the Russian North, many of whom he trained. He almost single-handedly transformed SPRI from a hub for physical scientists and exploration historians into a leading world centre for Arctic social science, by attracting eminent Arctic scholars, Ph.D. students, and Indigenous researchers from around the world. With the most comprehensive library on the Russian North outside of Russia, to which he contributed hundreds of publications, SPRI became the main centre for the study of the Russian North outside Russia.

Piers is a classic anthropologist of a sort rarely found among Arctic researchers. Even in his numerous collaborative projects with natural scientists in both laboratory and fieldwork, he brings a firm humanistic cultural approach from his previous experience in Classics (Ancient Greek Studies) and the anthropology of tropical forest tribes of India. He highlights the importance of understanding the spiritual vision and the emotional and social processes behind topics such as environment, climate change, and modernization by asking: What are the connections between change in the physical and social environment, between a shift in the ice and the withdrawal of an aviation service or a family subsidy?

This becomes particularly evident in his prize-winning book, Reindeer People: Living with Animals and Spirits in Siberia (2005). This remains an exceptionally penetrating and vivid account of the functioning of landscape, spirits, dreams and omens in moulding a sense of self and destiny in an Indigenous community in the region. With 50,000 copies sold, it is probably the most popular scholarly monograph on Russian Arctic Indigenous people worldwide. Piers is unmatched as a master of packing serious scholarly contributions in the most beautiful stories from the field, where biographies of his friends unfold in the foreground. The book became a significant source of public awareness about the Arctic, alongside the award-winning TV documentaries on the Arctic that Piers organized. His manifold and influential other works in the leading scholarly journals (not only Arctic-focused) contributed to putting the Arctic firmly to the front of international scholarly debates. These include works on space and migration, gender, biography, emotion, landscape, ethics of extractive industries, a new theory of sacrifice, relations between social and natural sciences, their collaboration, and inter-regional comparisons. His early background in ancient civilisations and Asian studies helped him to see contemporary Arctic research as regionally isolated and intellectually and especially budgetarily subservient to polar natural sciences. He has effectively made this point by the conscious choice of publication venues, but also via initiating numerous conferences at which presentations were about the Arctic but the discussants were specialists in African or Latin American studies. For those willing to learn, the insights produced were revolutionary.

His legacy also lives in the vibrant research community that he created of his students and colleagues. It is hard to find a contemporary Arctic scholar who has supervised such a robust corpus of PhD theses (over 40 so far), many of them later published as important monographs, e.g. on Chukotka, Alaska, Greenland, Canadian NWT, The Russian Arctic, and Sami communities of Lovozero and Karasjok. He has trained students across all Arctic regions and social science disciplines, and he helped giving birth to many ground-breaking discoveries, for which his students became famous: naming and memory (Nuttall); hidden economy of Russian gold and diamonds (Tichotsky); phenomenology of hunting (Willerslev); dysfunctional family courts (Khlinovskaya Rockhill); children’s reversal of parents’ pessimism (Ulturgasheva); Russian settlers’ appropriation of indigenous rhetoric of belonging (Thompson); relations between reindeer herders and oil workers (Habeck); rationales for Baptist conversion (Vallikivi); the meaning of loneliness in Greenlandic sociality (Flora), and others. Many of his former students now occupy leading positions in Arctic social sciences. His assistance in editing his colleagues’ articles and monographs constitutes unseen labour that goes way beyond any conventional expressions of acknowledgement. His generosity in designing international research projects, including editing and even rewriting the grant applications of others, helped bring many millions of dollars, euros and rubles into Arctic social sciences. Some of us have seen how he transforms a text without much consistency into a grant-winning one literally overnight.

His most visible contribution to the international Arctic social science community was his role in designing, chairing, and guiding the monumental research initiative, “Histories from the North – Environments, Movements, Narratives (BOREAS), a multi-year venture that eventually became the largest programme in Arctic humanities and social sciences. It engaged researchers and agencies from nine nations, with a cumulative budget of 6 million euros. Its seven funded research projects created strong multinational teams, eventually leading to some 800 publications. BOREAS activities took place during the International Polar Year 2007-2008 and together these two initiatives helped transform the ways research is done in the polar regions – by opening it to social sciences, indigenous communities, and the knowledge and participation of Arctic residents.

With his ceaseless efforts, Piers also shows strong commitment to the well-being of Arctic Indigenous peoples, most recently through scientific coordination of a Norwegian programme on ethical guidelines for extractive industries led by a Saami centre, and his directing of a bilingual English/Russian training and editing programme in Yakutsk that has enabled many Indigenous scholars to publish their work for the first time in leading international journals listed in Scopus and Web of Science. Within IASSA, although he never had a leading position, Piers advocated for the creation of the IASSA Extractive Industries Working group. Through his lifetime efforts he has had tremendous influence on the development of our field and of our Association. We consider him an obvious and unparalleled candidate for the 2020 IASSA award.