In this blog post, PDRA Peter Martin explores the ways in which travellers in the Arctic used poetry and song as a means to communicate ethnographic information about the Inuit to a variety of audiences.

The writing of poetry and songs was a common occurrence during voyages of Arctic exploration. European and North American travellers wrote rhymes and other forms of verse as a means to stave off the boredom and/or poor mental health often experienced during these long and monotonous expeditions. Rhymes could also be used as a jovial form of communication and were used to form social bonds between expedition members. They often mocked or caricatured senior members of the party and at times elicited some form of response or rebuttal.

These aspects may provide some context to the poem scribbled on the notepad above. Entitled ‘The Song of the Innuit’, the rhyme was written by the explorer and naturalist William Healey Dall during the 1899 Harriman Alaska Expedition.

This expedition was funded by the wealthy railway magnate Edward Harriman and was organised to explore the newly acquired US territory of Alaska. Harriman invited a large group of naturalists to travel with him through this vast and as yet relatively unexplored area in order to study the flora and fauna that would be found en route. As shown in the map above, the expedition travelled along the Alaskan coastline and stopped briefly on the Siberian peninsula, before returning to Seattle.

During the return voyage, it seems Dall had a moment of poetic inspiration. Motivated by his renewed acquaintances with the Yupik inhabitants of Providence Bay he picked up his field journal and made a new addition to the collection of poems and songs that had been penned by the various members of the expedition. The song has been transcribed below.

THE SONG OF THE INNUIT

Who scatter about the floe

And watch for the puff of the breathing seal,

While the whistling breezes blow.

By a silent stroke the ice is broke,

And the struggling prey below.

With the crimson flood of its spouting blood

Who flock to the broken rim

Of the Arctic pack where the walrus lie

In the polar twilight dim.

Far from the shore their surly roar

Rises above the whirl

Of the eager wave, as the Innuit brave

Who lie in the topek warm;

While the northern blast flies strong and fast,

And fiercely roars the storm;

Of fighting, hunting, and play,

When our ancestors came from the southland tame,

To the glorious Arctic day

There is one sits by in silence,

With terror in her eyes:

For she hears in dreams the piteous screams

Of a cast-out babe that dies —

Dies in the snow as the keen winds blow,

And the shrieking northers come

Of that dreadful day when she starving lay,

Alone in her empty home.

And we lie secure and warm,

Where the ghostly folk of the Nunatak

Can never do us harm.

Where at the evening meal

The well-filled bowl cheers every soul,

The Awful Folk of the Nunatak

Come down in the hail and snow,

And slash the skin of the kayak thin,

To work the hunter woe.

They steal the fish from the next day’s dish.

And rot the walrus lines —

But they fade away with the dawning day.

As the light of summer shines.

Of the long, bright Arctic day:

When the whalers come and the poppies bloom,

And the ice-floe shrinks away:

Afar in the buoyant umiak,

We feather our paddle blades,

And laugh in the light of the sunshine bright,

Where the White Man’s schooner trades.

Rosy and brown and gay;

And we shout as we sing at the wrestling ring,

Or toss the hall at play.

In frolic chase we oft embrace

The waist of a giggling maid

As she runs on the sand of the Arctic strand,

Where the ice-bear’s bones are laid.

While the kayak’s prow cuts the curling brow

Of the breaker’s snowy foam.

Of the cold, grey Arctic sea.

Where the breaching whale, the aurora pale

And the snow-white foxes be.

The pseudo-ethnographic nature of this song suggests that it is of particular importance to historians of Arctic knowledge. There is much that could be said about it, but some elements are of particular interest. The first stanza, for example, describes the practice of mauliq (seal hunting at breathing holes) that has long been carried out by Inuit across the circumpolar Arctic. Stanzas three and five, meanwhile, offer descriptions of the tent-like dwellings (‘topeks’ in Dall’s words) used by the Yupik situated in Russia’s Providence Bay. The poem also makes reference to Inuit modes of transport. The umiak is described as ‘bouyant’, while the kayak is praised for its ability to cross the wake of a steam-powered ship with ease.

It is also important to note that the poem did not remain confined to Dall’s notebook. Following the completion of the expedition, the members were keen to circulate the various pieces of information that had been gathered. The Harriman Alaska Series was therefore published, presenting the considerable scientific work that had been carried out.

Intriguingly, Dall’s ‘The Song of the Innuit’ was appended to Volume II of the series, as we can see in the images below. Printed in full, we can see the rhyme was also accompanied by a series of illustrations that depict some of the scenes described. Publishing the poem in this way, it seems that Dall was keen for the poem to be read by audiences beyond the members of the expedition. By adding in the illustrations, it also suggests that he envisaged a wider audience for the song beyond a purely scientific readership. 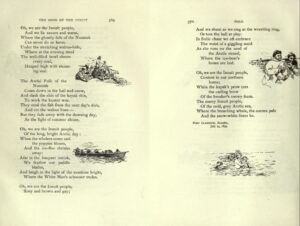 Dall’s poem therefore provides a fascinating example of the ways in which knowledge and information about the Arctic regions were able to circulate amongst a range of audiences during the late nineteenth century. Accounts of travel and exploration in the Arctic were incredibly popular, and even scientific publications such as the Harriman Alaska Series were purchased and read by broad cross-section of nineteenth century society. Dall’s song therefore allowed considerable ethnographic information pertaining to the Inuit to be communicated to a range of scientific and lay audiences.