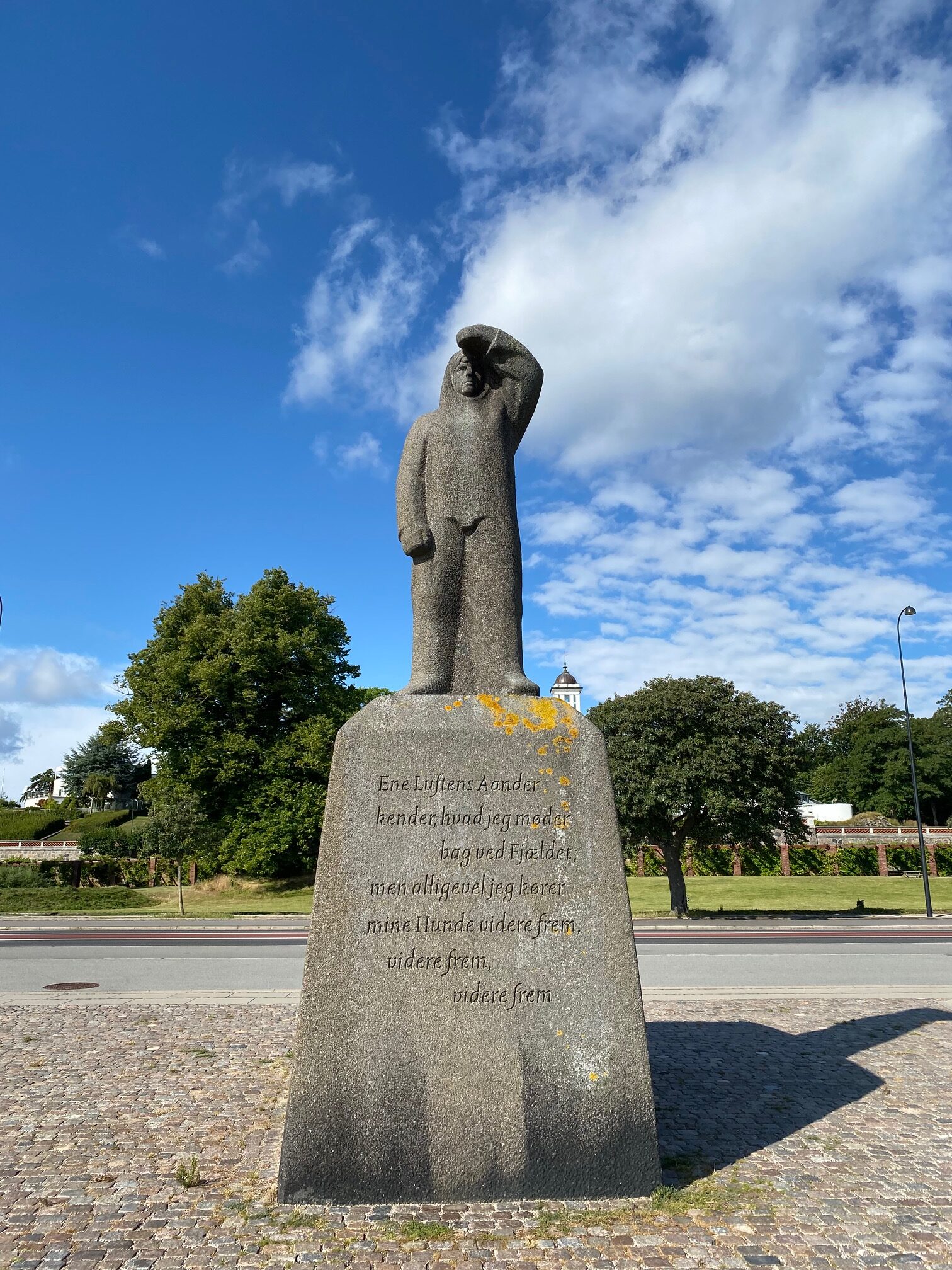 In this blog post, PDRA Nanna Kaalund reflects on Danish explorer Knud Rasmussen, the ways in which he has been remembered in Copenhagen, and the consequences for both Greenland and Denmark.

The historical relationship between Greenland and Denmark has shaped the architecture and city planning of Copenhagen in many ways. From the (re)development of harbours to transport goods to and from Greenland, to the naming of streets and town squares, the Greenlandic connection to Copenhagen is evident throughout the city. Statues and monuments tell stories about specific imagined visions of Greenland, and their presence in the metropolitan landscape are revealing of the continued construction of idealised accounts of the colonial relationship between Greenland and Denmark. As many historians have observed, the meanings of monuments, memorials and objects are constantly evaluated through contemporary concerns. One such example is the statue of Knud Rasmussen, which is located in Charlottenlund, Copenhagen.

As the long list of expeditionary results listed on the statue of Knud Rasmussen indicate, he was a prolific Arctic explorer and researcher. In Inuit Studies, Rasmussen is famed in particular for the fifth Thule expedition, which took place between 1921 and 1924. That venture covered an extensive geographical distance, going from north Greenland along the northern shores of Canada and Alaska. Rasmussen and his team collected a large amount of objects during their journey, and they claimed to have scientifically described all the main Indigenous groups along the way. A large collection of Inuit objects held at the National Museum in Copenhagen were sourced during the fifth Thule expedition.

The results from the fifth Thule expedition are, accordingly, significant in terms of their impact on Danish Arctic research, as well as on the portrayal of Greenland and Inuit in Denmark. At the same time, the expedition and its afterlife were also important in establishing Rasmussen as an authority on Greenland. He published several books, in addition to delivering talks and lectures about Inuit history and culture, and he was celebrated for his geographical and scientific achievements. As so many European and Euro-American Arctic explorers before him, Rasmussen made a career based on ‘discovering’ Arctic spaces. 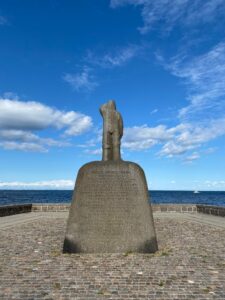 In addition to the list of his geographical achievements, the statue of Rasmussen in Charlottenlund also carries a poem written by the explorer:

Or, with apologies for my translation into English:

“Only the spirits of the air know,

what I will meet behind the mountain,

but I still drive my dogs further forward,

The poem invokes an imagery of Rasmussen travelling through an empty landscape inhabited only by the “spirits of the air”. There is a long tradition of European and Euro-American explorers portraying the Arctic as an empty white space, and themselves as lone travellers. Investigating the provenance and consequences of this idea has been a central focus of our work for the Arctic Cultures project.

The use of this construct for Greenland is further reinforced in the name chosen for the expedition starting point, the Thule station. Before their first joint venture, Rasmussen and his team established a station by the north-western coast of Greenland in 1910, and named it Thule. This location, in the context of ultima Thule, is not simply a designator for a furthest geographical north. As with Rasmussen’s poem, the name given to the station and the expeditions, Thule, invoked associations of emptiness and solitude. The anthropologist Kirsten Hastrup has written about Rasmussen’s depiction of the high Arctic as a fundamentally foreign and empty place. Rasmussen’s portrayal of himself as a lone traveller was a powerful tool in the social construction of the explorer ‘back home’. It also shaped metropolitan imaginations of the colonial relationship between Greenland and Denmark. Greenland was, in this constructed vision, a place of and for discovery. The memorialization of explorers such as Rasmussen is, therefore, not simply about the individual persons depicted by statues in the Copenhagen landscape, but also about creations of national (and imperial) identities.