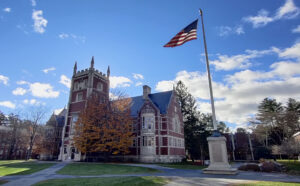 Peter has recently completed visits to archives across the USA as part of his research for the Arctic Cultures project. 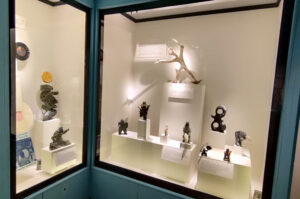 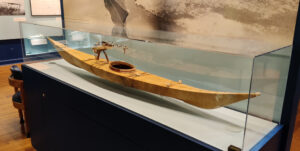 The trip started in Brunswick, ME where he visited the Peary-MacMillan Arctic Museum at Bowdoin College. The museum was established to commemorate the Arctic exploration undertaken by two of the college’s alumni – Robert Peary and Donald MacMillan. There are also many archival records relating to both men in the Special Collections of the College’s library, including field diaries, book manuscripts and correspondence. 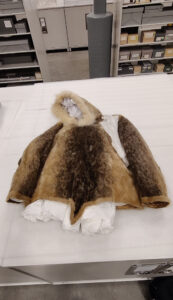 Peter was also lucky enough to go ‘behind the scenes’ and study some of the objects held in the museum stores. The museum holds extensive collections of Inuit material culture, most of which were collected by Peary and MacMillan during their various expeditions. Some of the objects can be seen in the images above.

Peter then travelled on to Boston, MA where he studied Inuit material culture collections held by Harvard University’s Peabody Museum. The celebrated Arctic scholar Franz Boas played a key role in establishing this museum, and there are therefore various Inuit objects and artefacts in the collections as a result. This includes the sledge used by Robert Peary during his time in the Arctic.

Peter’s final stop was Washington, DC. Firstly, he visited the National Museum of the American Indian where he was able to study the collections relating to the Yup’ik peoples of Alaska. This museum has a strong focus on indigenous curation and there were many displays depicting Yup’ik culture and customs as told by the communities themselves. 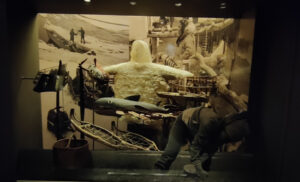 He then visited the Library of Congress to study the papers relating to the Arctic explorer Frederick Cook. Cook claimed to be the first man to reach the North Pole, although these claims have since been disputed. Cook did, however, rely heavily on indigenous Arctic peoples during his travels and documented this support in his field notes and diaries which are stored in the library.

Peter would like to thank Genevieve LeMoine, Susan Kaplan, and Mike Quigley at the Peary-MacMillan Arctic Museum, and Roberta Schwartz and her team at the Bowdoin College Library, for their warm welcome in Brunswick. He would also like to thank the staff of the Arctic Studies Center at the Smithsonian, including Igor Krupnik, William Fitzhugh and Stephen Loring, for their interest and support in the project.

Image 12: Yup’ik display at National Museum for the American Indian.

Image 13: Yup’ik display at National Museum for the American Indian.

Image 14: Yup’ik display at National Museum for the American Indian.

Image 15: The Library of Congress.