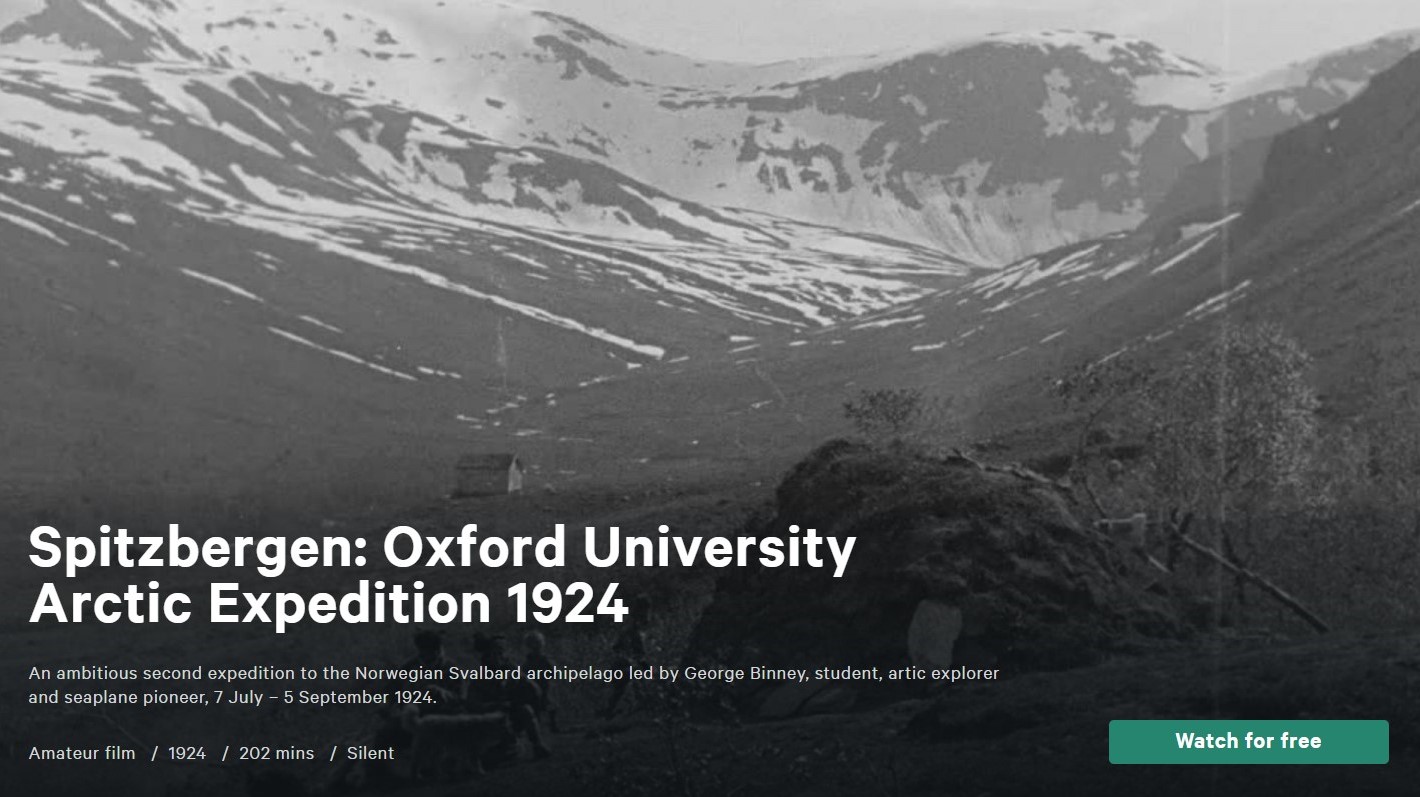 In this blog post, PDRA Johanne Bruun reflects on the use of silent film footage produced during Arctic expeditions in the 1920s.

Arctic cinematography has long played a significant role in representing northern locales to southern-based audiences who might never experience the region first-hand. During the early decades of the twentieth century, polar explorers turned to film, both as an instrument of science as well as one of storytelling and self-promotion. Some of the most famous examples are Frank Hurley’s film South (1919) and Herbert Ponting’s Great White Silence (1922), showcasing Antractic voyages by Shackleton and Scott. Alongside these grand stories of polar heroics, and perhaps inspired by them, a series of smaller productions and amateur films emerged.

This blog contains my brief reflections on a minor personal obsession: a seemingly random sequence of black and white film clips, showing scenes from the 1924 Oxford University Expedition to Svalbard. The film is silent, it has no storyline, and knowing the history of the 1924 expedition, it is clear that the footage is not in chronological order. Whilst not an obvious blockbuster, this film has all the elements of a polar thriller of its time: dramatic landscapes, wildlife, technological triumph, and an attempt at comedy. The film provides insights into the emergent culture of university exploration during the 1920s, and demonstrates that the so-called ‘Heroic Age’ of polar exploration (dated roughly by Museum curators as the late 1800s to early 1900s) did not end with Shackleton.

Polar exploration has always been at the forefront of technological innovation – things such as the steam engine and tinned food were once modern inventions too. Polar film making in particular emerged alongside a series of other technologies new to polar travel, such as the telegraph and the airplane. Showcasing your ability to use modern technology when travelling under challenging Arctic conditions was a source of significant status. Knowing the landscape and moving through it was seen as two sides of the same coin. The Oxford University film contains long, elaborate scenes of the explores moving through landscapes covered in ice and snow. We see the expedition ship surrounded by ice floes, we see dog sled struggling through slushy ice fields, and, not least, we see an Avro-lynx seaplane soaring through the air against the backdrop of snow clad mountains. Scenes of the immense work effort that went into repairing the seaplane on the ground lets viewers know that flying in the Arctic was no small achievement.

Part of what makes the film particular haunting is its depiction of animal lives – and deaths. Through current lenses, its scenes of human-animal interaction are heart breaking. Wildlife, including polar bears and walruses, which we now value as symbols of a fragile ecosystem, is hunted and killed for sport. In one scene, a polar bear cub is dragged on a leash, swimming behind a rowing boat. Later, we see the cub let loose aboard the expedition ship, where expedition members poke at it with sticks for comic effect. It is distressing to watch. Yet it holds valuable historical information about the relationships between humans and animals during Arctic fieldwork.

Less disturbing are the many long sequences documenting the lives and habits of Arctic birds, probably part of the expedition’s ecological research programme to study animal behaviour. However, even these scenes lose some of their innocence. There are obvious parallels between the film’s documentation of animals and indigenous Sámi. Although Svalbard has no indigenous population, the film depicts scenes of Sámi family life, presumably filmed in mainland Norway where the expedition stopped on its way north. Wearing traditional clothes, they bring an ‘exotic flair’ to the story of the expedition. Sámi are shown coming out of their huts constructed from logs and peat, which blend into the landscape. They are supposedly part of a ‘natural order’, which the Oxford scientists are there to observe and document. This footage is a powerful reminder that the Oxford University Expedition was part of longstanding British cultures of violent colonial domination, which relied on representing indigenous peoples as less cultured and as less sophisticated.

The 3 hours and 22 minutes of disjointed footage, which is now freely available online, was certainly not intended for public consumption in its current form. Yet it seems likely that some of this footage was used in the 70-minute film produced for the expedition. At the Oxford Super-Cinema, this film was screened together with The Nibelungs (1924) – a silent fantasy film of dragon slayings and magical kingdoms. The Oxford film footage, even in its disjointed and unedited form, is best described as equal part documentary and equal part fantasy. Amateur recordings, such as these, provide a fascinating window into the lives and practices of polar explorers. Yet the camera, of course, is not objective. As audiences, we only ever see the scenes and episodes that the film makers wanted us to see. Looking through the footage of the 1924 Oxford University expedition tells us something about what was important to the explorers and how they would like to be known and remembered. For anyone who has 3 hours and 22 minutes to spare, the Oxford footage makes for a meditative watch. It is, however, sometimes distressing, thought provoking, and it brings to mind the violent relations of empire disguised as healthy, good-spirited adventure.

Image: Screenshot of the opening scene of the collated footage from the Oxford University Arctic Expedition, 1924, shot by F. Tymms. The film is freely available online through the archives of the Royal Geographical Society and the British Film Institute.