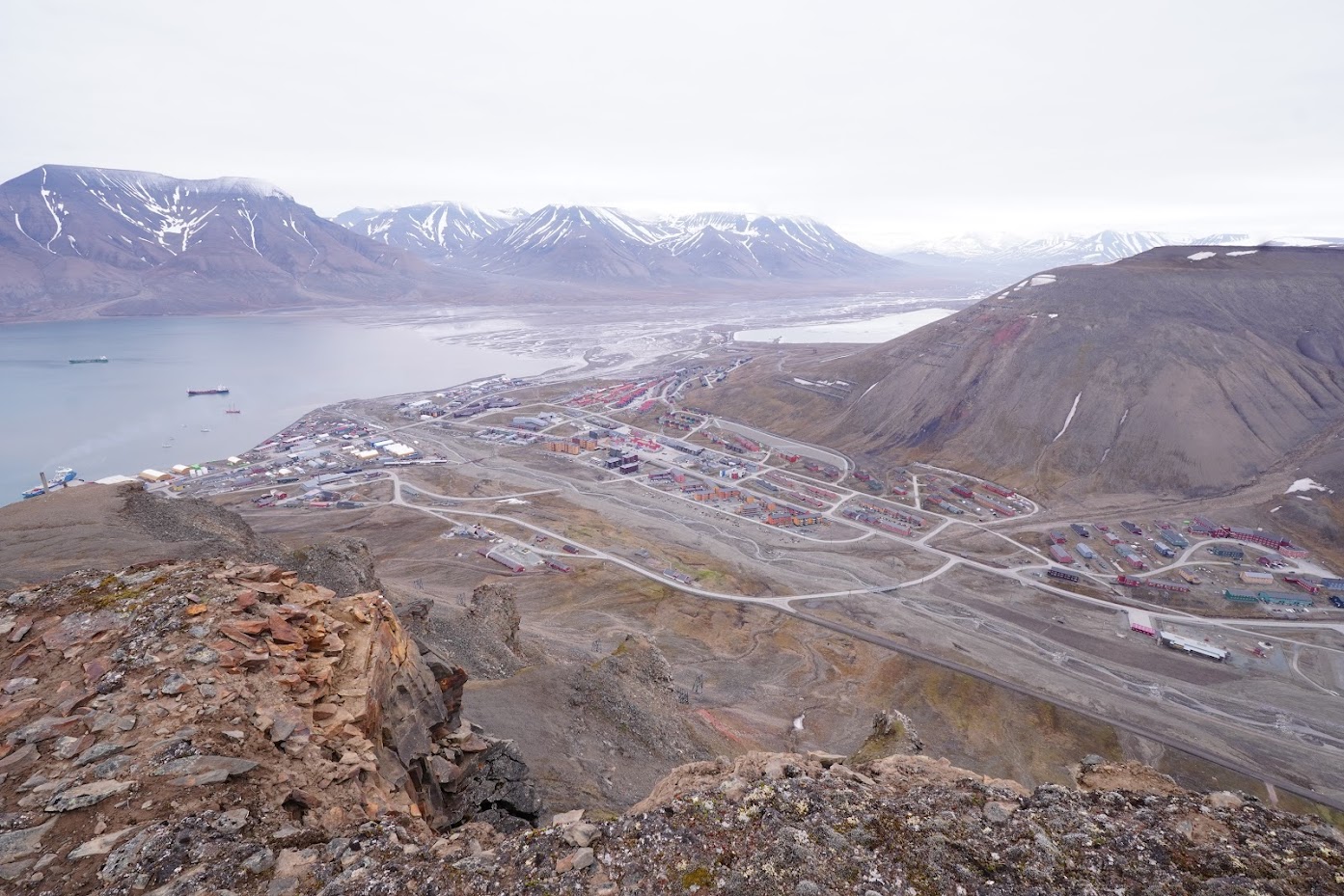 In this blog post, PDRA Johanne Bruun recounts her recent research trip to Svalbard. She reflects upon her own journey in relation to that of the Oxford University Arctic Expeditions, one hundred years prior.

Travelling there: Having flown from Heathrow via Copenhagen, my flight from Oslo to Longyearbyen is scheduled to land in Tromsø. For my purposes this feels fitting. For the Oxford explorers, this too was their “gateway to the Arctic”. For the few women who accompanied their husbands on the first leg of their journey north, this was as far as they were allowed to follow. Unlike for these women, my journey continues.

Even though we’ll continue on board the same plane in the exact same seats, in Tromsø all passengers are asked to disembark and go through passport control before re-boarding. Though Svalbard is a visa-free zone as per the Spitsbergen Treaty of 1920, additional checks are in place as Norway is part of the European Schengen area and Svalbard is not. In the passport queue, I’m surrounded by adventure travellers in expensive hiking clothes, most with grey or greying hair. Travelling north like this is costly, and many of the people who have the funds have at least a decade or two on me, if not more. This feels like an interesting contrast to the Oxford expedition members’ emphasis on the importance of youth and hard bodies in relation to northern travel.

Once in the air, I gaze intently at the landscape below – snow-covered mountains and blue ocean – contemplating the relation between journeys made 100 years apart. Later that evening, I’m having dinner in a place that advertises meals “fit for an Arctic explorer”. I look down at my quinoa salad (the only vegetarian option) with a sense of amusement – and also guilt at the environmental impact of my meal.

Longyearbyen: Longyearbyen, Svalbard’s largest settlement, serves as my base for the fieldwork. Established in 1906 as a coal mining town by the American businessman, John Munro Longyear, Longyearbyen retains strong, visible links with its heritage. The town is crisscrossed by successions of wooden structures formerly used to transport coal from the mines to the harbour. As protected elements of Svalbard’s cultural heritage, they tower over the modern built environment with its charmingly colour coordinated houses. In many ways, Longyearbyen still has some of the same characteristics as it did in the 1920s when members of the Oxford University Arctic Expeditions visited. Life there is still relatively transient, housing is linked to employment, and there are no possibilities for retiring there. Under Svalbard law, you are neither allowed to begin nor end your life here. Although there are plenty of facilities for children, and it is evident that many families live here, giving birth here is not permitted just like how one is not allowed to die. 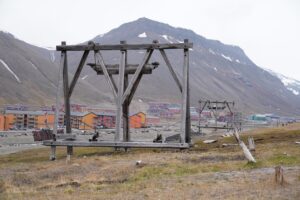 ‘Old Longyearbyen’ of the 1920s is no more; almost everything was destroyed during the Second World War. Yet the foundations of the original buildings remain as a prominent feature. Walking through this archaeological site, you get a clear spatial sense of the size and shape of the buildings and streets. The sense of historical foot-stepping is palpable.

Adventdalen: Adventdalen is a big open valley east of Longyearbyen. In the 1920s, this was a significant site of collection for the Oxford Expeditions and provides a strong sense of connection with the past. The birdlife is rich, and even though the landscape looks a dull brown, tiny flowering plants are aplenty if only one looks closely enough. When walking from Longyearbyen into Adventdalen, you encounter a boundary, visibly marked by the town’s famous polar bear warning sign. For safety reasons, only those armed with a rifle can progress from here. 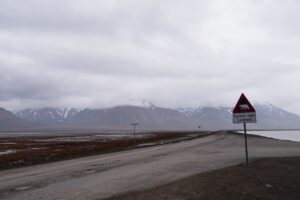 Grønfjorden (Barentsburg): Sailing from Longyearbyen to Barentsburg became a way of connecting with one of the first points of contact and prolonged stay for the Oxford Expeditions. In the 1920s, this was a Dutch mining settlement, home also to a permanent wireless station and post office. Since 1931, this has been under Russian ownership and management. Still an active Russian mining town, Barentsburg is famous for its Soviet aesthetics and prominently displayed Lenin busts. The original plan had been to stay for a few days, but the Russian invasion of Ukraine made staying in the Russian-owned hotel feel impossible. 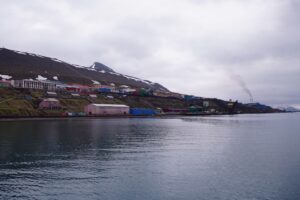 When you move south of Barentsburg, the remains of the former Dutch settlements become visible. In 1924, the Oxford explores assembled their seaplane at this site, which used to house the remains of an old whaling platform. Every human-made remnant in Svalbard’s landscape from before 1946 is automatically protected. Some people I meet, particularly residents of Svalbard, roll their eyes at some of this, seeing some of the remains of past industries as litter rather than cultural heritage. The archaeologists I had spoken to in Longyearbyen calls the process of gradual deterioration “død i skønhet” (“death in beauty”), though none of them seem to really care for the term. For the purposes of the Arctic Cultures project, these remains provided a significant point of connection with history. The Oxford explorers also encountered a landscape littered with traces of the past, left behind by long-gone industrialists. This, it seems, is part of the fabric of Svalbard and has been so for many decades.

Billefjorden (Pyramiden): Another significant site in relation to the three Oxford Expeditions is Billefjorden and the area around the Nordenskiold Glacier. Sailing from Longyearbyen to Billefjorden, towards the so-called ‘Soviet ghost town’ of Pyramiden (‘the Pyramid’), it is striking how much of the coastline in this area is marked by human industry – remnants of mining, trapping, and extensive amounts of driftwood. Tropes of an ‘empty Arctic’, as promoted by the Oxford Expeditions, were always deeply problematic, inherently colonial, and fundamentally untrue.

The ship, Polargirl, docks at Pyramiden. Like the Oxford vessel (Polar Bjørn), Polargirl too is a refurbished fishing vessel originally from Tromsø. During the 1920s, Pyramiden was Swedish owned and not particularly active. When taken over by the Soviets in 1927, it was transformed into an elaborate town, complete with concert hall, sports centre, experimental green houses, and a large swimming pool. When the mine was closed in 1998, Pyramiden was abandoned, leaving pretty much everything behind. Though Pyramiden is promoted as “frozen in time”, the place is marked by an aesthetics of decay – dead houseplants, scaling paint, broken lightbulbs, bird nests, and reindeer dung. Yet what jumps out is the impressive craftsmanship, care, and design of the place. Elaborate mosaics and intricate woodwork. Clear examples of Soviet investment in evidencing their skill at high northern habitation. 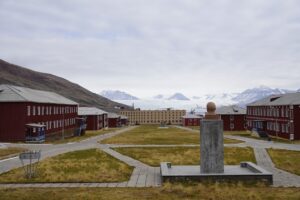 Unfortunately, access to the Nordenskiold glacier and the three adjacent cabins, Brucebyen, is blocked by ice. So is the nature of polar travel. Brucebyen (‘Bruce City’) was established in 1919 by the Scottish Spitsbergen Syndicate, and was linked to their attempted mining activities in the area. Having an active presence at this site was key to retaining this claim. Hence, the Syndicate actively encouraged the Oxford Expeditions to use the cottages as a base for their work. The cabins are still in use to this date as an outpost for residents of Longyearbyen seeking a break from ‘city life’. Norwegian cabin culture seems to be as prominent in Svalbard as it is on the mainland. Interestingly, active use is part of Svalbard’s strategy for protecting such cultural heritage sites. 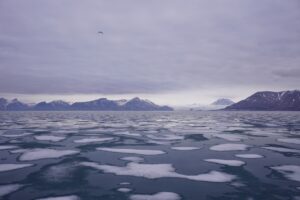 Svalbard Museum: Svalbard Museum, located in Longyearbyen, houses fascinating collections of artefacts from around the archipelago. ‘Behind the scenes’, the collections are structured in terms of the materiality of the object – a ‘dry room’ for metals, a ‘humid room’ for textiles and wood, a ‘cold room’ for photos, and a freezer. Few minute traces of the Oxford Expeditions are housed here – a wooden ammunitions box and one exemplar of the bullets it once contained. Other remnants can still be found in the landscape, where they are protected as part of Svalbard’s cultural heritage.

Image 2: Landscape as seen from the air upon approaching Longyearbyen. Photograph by J.M. Bruun, 7 June 2022.

Image 4: Remnants of ‘Old Longyearbyen’ with the newer buildings in the background. Photograph by J.M. Bruun, 9 June 2022.

Image 5: Adventdalen as seen from the approach from Longyearbyen. Photograph by J.M. Bruun, 9 June 2022.

Image 7: View from the Pyramiden culture centre towards the Nordenskiold glacier. Photograph by J.M. Bruun, 13 June 2022.