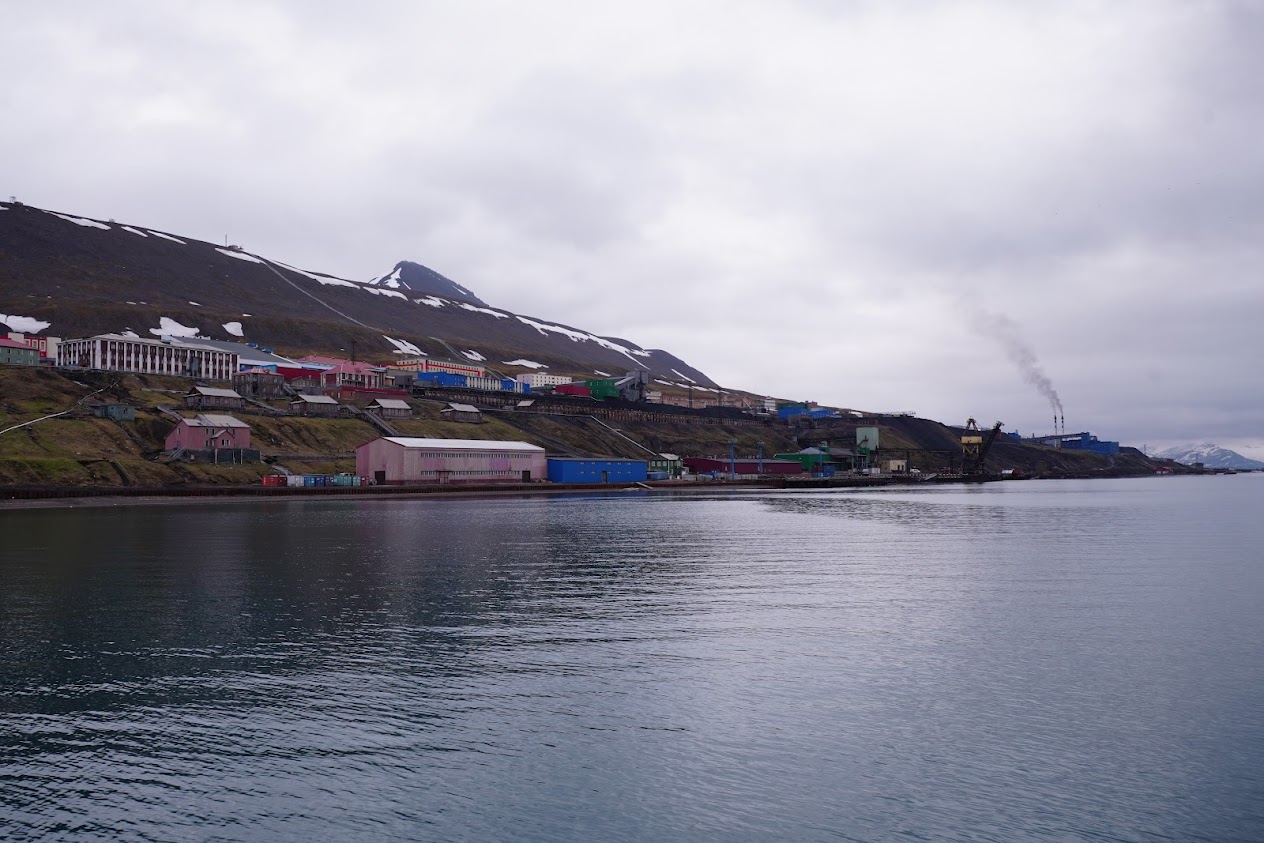 In this post, PDRA Johanne Bruun draws from her field notes to reflect on her brief visit to the settlement of Barentsburg.

When planning for my Svalbard fieldwork over the past couple of years, I never anticipated that it would be coloured by war. Then came the brutal Russian invasion of Ukraine. A key site in my research is what is now known as Barentsburg. During the 1920s, which is the key period I’m researching, the site was Dutch-owned. Since 1932, however, Barentsburg has been a Russian coal-mining town of 450 inhabitants, most of whom are Russian and Ukrainian citizens. Following the Spitsbergen Treaty of 1920, Russia maintains control of the site via its consulate, though Norway holds formal sovereignty and Norwegian law rules. This is not Russian state territory in any legal sense. But at least to some, it feels uncomfortably close.

I debate the ethics of going, seeking advice from anyone I can think of. The official advice from Reiselivsrådet is that it’s ok to go, but people shouldn’t spend money there. This solution seems clumsy, reflecting the murky nature of the issue. Reading local Norwegian newspapers, it is clear that not everyone shares this opinion. In the end, I opt for a daytrip instead of the overnight stay at the Russian state-owned hotel that I had envisaged years ago. 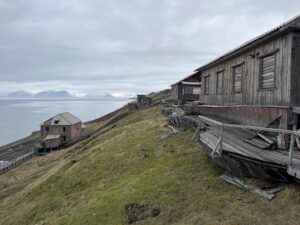 On a chilly Friday morning, I board the small ship Polar Girl. The name strikes me as a suitably feminine counterpart to that of the Oxford University vessel, the Polar Bjørn (polar bear). I strike up a conversation with our guide, Masha. She is Russian, originally from southern Siberia. Masha tells me how tourism to Barentsburg and Pyramiden (another Russian site) has dropped significantly, and public events in these places have been largely cancelled or moved to Longyearbyen, Svalbard’s main town. At least one tour company no longer docks at the Russian sites. Others instruct their guests to use facilities, like restrooms, but not to spend any money. “They use the infrastructure, but they don’t support the people who maintain it”, Masha says, noting her disagreement with this practice. “Everyone here has friends in Barentsburg”, she claims, not unlike how so many Russians have family in the Ukraine. Masha herself has an uncle in Kyiv.

After a few hours at sea, we approach Barentsburg. A young woman is standing on the docks ready to greet us. She is energetic, smiling, almost unable to keep still in one place. Much to my surprise, I recognise her! Her name is Natalia, and two months prior, she had been interviewed by the Norwegian broadcasting company, NRK. When asked to comment on the war, she described being “scared as shit” to even talk about it, before quickly walking away. Later, she returned to the journalist, noting that she had to think before talking to him. In the NRK article, she expresses being vehemently against the war, yet she emphasises the need to put politics to one side in Barentsburg in order to keep the community functioning. She recalls not being able to meet socially the way people would normally do, for a drink at The Red Bear, as their Russian bank accounts were frozen. Having read this article, I opt not to ask her any questions about her experience, tempting as it is. For Natalia, Barentsburg is an escape from a war that she perceives as brutal and unjust.

Natalia is bright, she is articulate, and she chooses her words with extreme care. A member of the tour group makes a remark about this being Russia-by-proxy. She is quick to dispel this: “Do you have a visa for Russia?” she asks, “Let me see your visa! No? This is Norway, you are in Norway”. This sentiment – that fact that we remain on Norwegian territory – is repeated again and again, to the point where it becomes laboured. I wonder if she always felt so strongly about this, or whether it’s an effect of the war.

We walk from the docks, up a long wooden staircase, past ruin upon ruin. The place initially feels empty, dilapidated. People stop to take pictures. I do too. An aesthetics of decay dominates. And perhaps this is part of what people are here to experience – a sense of Russian fragility, a crumbling political system, thoroughly located in the past. As we reach the town square, which include an impressive looking building housing sporting facilities, a library, and a concert hall for 300 people (“almost enough to fit all of us”, Natalia says with pride), I hear far fewer camera clicks.

The cameras come back out as we approach the colourful residential buildings, which Natalia introduces as “the northernmost skyscrapers in the world”. They are only four stories high, but due to the challenges of constructing tall buildings on permafrost, this is a significant feat of engineering. Celebrating this achievement is a monument adorned with Russian flags and a tribute to communism. In front is a bust of Lenin overlooking the town. “We leave the statues of Lenin – the northernmost statues of Lenin – because we are proud of our heritage”, Natalia explains, “and also because tourists love to take pictures of them!”. She has a spark in her eyes as she adds the latter remark. She is deliberately making us, as visitors, complicit in the Soviet aesthetics of Barentsburg. 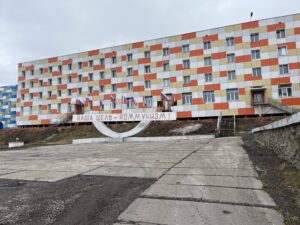 During World War II, Barentsburg was bombed to the ground. Only one building remains from before that time: the old mass hall, where the miners used to come and eat for free up until the 1990s. On one gable, there is a mural of a stereotyped polar explorer, alongside a text which Natalia translates as something like “If you ever visit the Arctic, you’ll always see the Arctic in your dreams”. The other gable is adorned by scenes of pine trees and corn fields. “This is thought to be the Ukrainian fields”, Natalia tells me. 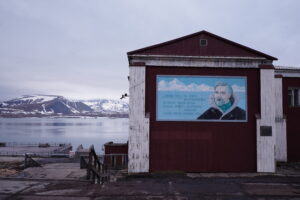 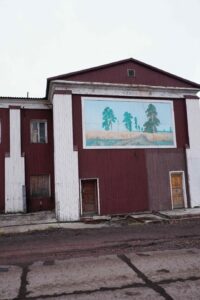 For Natalia, it seems, the most important thing that she wants to emphasise is that this is not some isolated or stagnant outpost. “People think that in the Arctic, everything always stays the same”, she notes, “but this could not be further from the truth”. Every single building in the community has lived several different lives, depending on the needs and desires of community members. “Things here are constantly changing, adapting, they have to!”, she adds. She also points to the continued connection with Longyearbyen – a recent friendly sporting event, where they competed in volleyball, football, and chess. Ever since the discovery of Svalbard in 1596, Natalia claims, this place has never been isolated as so many people from all over the world come and go. At this moment, however, the streets are deserted bar our small group. According to Natalia, people stay indoors, or in the coal mines below.

The tour ends at The Red Bear, the local bar and brewery, and at the town shop. In the end, I buy a handful of postcards. It feels rude, disrespectful even, not to. After all, I chose to come here. At that moment, it does not feel like trading with the Russia state – it’s people who are making a living in a small Arctic community and whose lives have been made significantly more challenging by a conflict that they have no hand in.