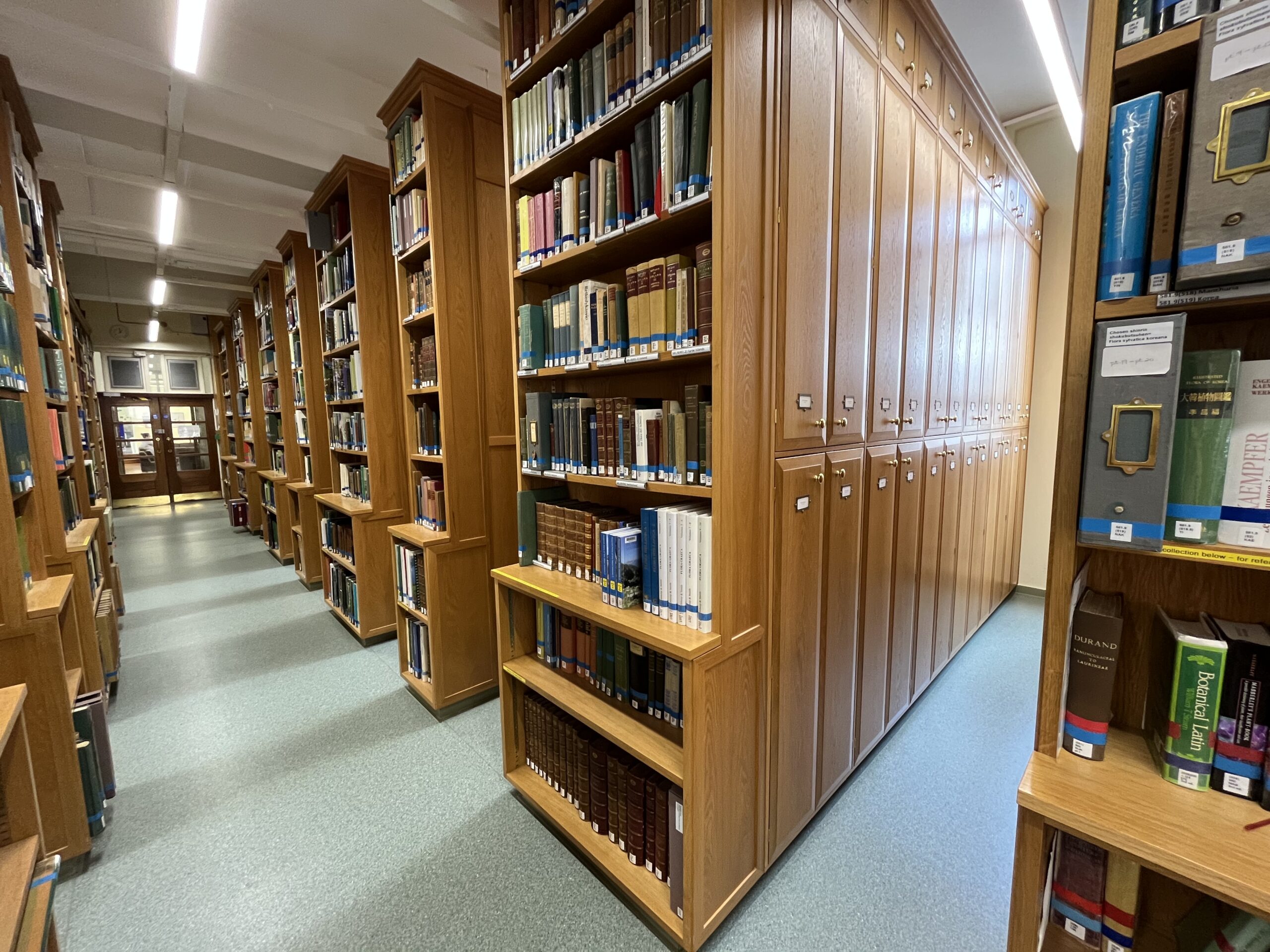 In this blog post, former PDRA Johanne Bruun reflects on her research visit to the Oxford University Herbaria in search of remnants of Arctic expeditions.

One of the first things my guide, Professor Stephen Harris, shows me is a cabinet densely packed with folder upon folder of plant material. Many of the folders are bright red, indicating that they contain an original type specimen. A botanical type specimen is the individual plant used when the species was formally described and given its scientific name. When a species of the same genera believed to be new to science is discovered, it needs to be compared to the type specimen to determine whether it is indeed distinct. The Oxford Herbaria as a whole house more than 40,000 original types. Stephen describes this sea of red as a bit “embarrassing”. He is acutely mindful of the colonial legacy of the collections under his care, and the source of his embarrassment comes from knowing that none of the types coming from places like South America, for example, are part of the national collections of their places of origin. Instead, they are here in Oxford at one of many centres of British colonial knowledge production and accumulation.

Many of the plants in this collection have complicated social and political histories, some of them violent. Parts of the collections are, according to Stephen, too disturbing to be put to use. As an example, he points to collections created through slave labour which include derogatory and racist language in the associated notes. Even seemingly innocent specimens, like the ones I have requested, may have political purchase. Stephen points out how the presence (or absence) of certain specimens may be mobilised as biological indicators that a landscape is unproductive, in need of management, or that it could be put to ‘better use’. Such sentiments may overwrite the experiences and uses indigenous or local human and non-human inhabitants. As important as herbaria are for historical and modern plant sciences (and they are important!), it is not a given that their powers are mobilised only for good.

Stephen retrieves a collection of salix polaris (dwarf willow) from the Oxford Expeditions (Image 2). Given the conversation we have just been having, it is hard not to view the small, withered collection with some degree of scepticism as to the kind of work they might do. The 101-year-old specimens are all of a deep, brown colour, almost black. If it was not for the well preserved flowers, I would not have recognised them as the same species I encountered in Svalbard one month prior (Image 3). Tracing this, the world’s smallest tree, across the field and the archive feels significant as a way of connecting with history. Yet I also recognise that my ability to do so rests on a position of privilege which cannot be taken for granted. My ‘classic’ geography field encounter was valuable to me. Yet standing in the herbarium faced with the condensed results of past fieldwork feels like a powerful reminder that there are other ways of connecting with the Arctic field that do not involve carbon-intensive and ‘muddy boots’ type approaches to generating geographical knowledge. What I am faced with in the herbarium is a different incarnation of an ‘Arctic field site’, or at least a significant point of connection mediated through the tiny dried plants. 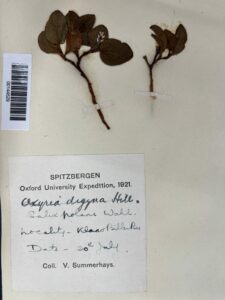 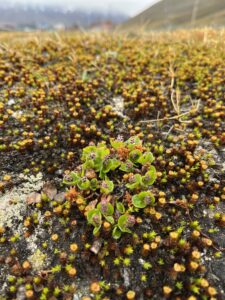 Despite their dull appearance and the fact that they remain common across northern landscapes, specimens like the 1921 salix polaris remain valuable to science. Situated in space and time, they are significant sources of historical ecology, interspecies relations, and even atmospheric conditions. Evidence of insect activity across specimens, for example, can give an indication of historical insect populations when scaled up. It is also possible to track morphological changes over time, or changes in, for example, flowering patterns. Though detailed chemical analyses, historical plant material can be used as sources of stable isotopes to measure pollution levels at particular points in space and time, or be used to construct carbon calibration curves.

In the herbarium, I am enveloped by a deep sense of ecological, social, and political history. It feels impossible not to be drawn in by this place and feel inspired by the many forms of human-plant sociality it facilitates. Each specimen is mounted on a sheet of paper alongside key information about when, where, and by whom it was collected, and sometimes habitat information as well. As Stephen reminds me, this is a different kind of archive, a collection for working at. The sheets of paper are lively documents upon which scientists across time will add their notes and observations in addition to the original data, creating a collage of natural knowledge. The sheets become the site of a form of conversation between scientists across space and time. Having worked these collections for many year, Stephen is now able to identify the handwritings of individual scientists across history – a useful skill when tracing specific knowledge claims or conversations. His level of tacit knowledge is astounding.

Judging by the lack of supplementary inscription on the Salix polaris collection sheets, no one has consulted these collections since they were first archived back in 1921. The full significance of these specimens is not yet known. The historical collections of the Oxford Herbaria are heavily orientated towards future needs, methods, and scientific interests that we cannot possibly know at present.

I leave this, my ‘alternate field site’, feeling inspired and enthused, both by the place itself and by my encounter with Stephen, who is a fountain of knowledge of these historic collections. Arctic fields and the material archives within which they become embedded are intimately connected. Visiting the Herbaria has really brought home their significance as sites of both cultural and natural heritage – and its significance as a site that effectively dismantles any rigid distinctions between these two categories.