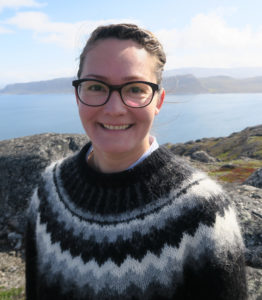 Mari gained her BA (2007) Cultural and Social History at the Ilisimatusarfik (University of Greenland), her MA (2009) Archaeology at the Memorial University of Newfoundland, Canada, and her PhD (2013) Prehistoric Archaeology at the University of Copenhagen, Denmark. Her research primarily focuses on the pre-Inuit (Dorset) and early Inuit cultures across the eastern Arctic and Sub-Arctic. More generally, she is interested in understanding past human behaviours and cultural practices across time and space, and the role that material culture plays in social life.

Since the completion of her PhD, Mari has worked in different capacities in higher education, government, and as an independent researcher. She has taught undergraduates about the prehistory of Greenland and Arctic archaeology at the Ilisimatusarfik, and continues to work there as an external examiner. Her interest in the impacts of colonialism on indigenous societies derives from her own Greenlandic cultural background, and for over two years (2014-2016), she worked as the Head of Secretariat for the Greenland Reconciliation Commission at the Premier’s Office.

Mari also has extensive interests in education. Prior to beginning her archaeological studies, Mari received a certified primary and secondary teaching degree from Ilinniarfissuaq, Greenland (2002), a four-year programme involving a year at the University of Hedmark, Elverum, Norway. For nearly six years, she taught at Ukaliusaq— one of the public schools in Nuuk, Greenland.

Mari returned to Brussels for personal reasons in February 2019.